Reflecting on Racism and White Supremacy by Reverend Tom Capo 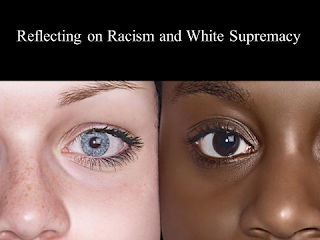 On June 11th, DuPage Unitarian Universalist instead of worship offered a White Supremacy Teach In.  Many Unitarian Universalist churches around the country offered these Teach In's rather than a normal worship service.  Our service included readings, reflections, music, and hymns, but the bulk of the service involved the people in attendance discussing the following questions:

1.   How is white supremacy evident in your life or in this congregation?

2a. If you are white, what changes can you make to reduce your white privilege?
2b. If you a person of color, what can white people to reduce their white privilege?
3a.  If you are white, what challenges do you feel you will you face as you try to be more conscious of your white privilege, as you try to reduce how much you use it, as you use it to help people of color?
3b.  If you are a person of color, what insights about white supremacy can you offer to white people in this congregation?
What is White Supremacy?  The Black Live Unitarian Universalist website offers these clarifying words : "White supremacy is a set of institutional assumptions and practices, often operating unconsciously, that tend to benefit white people and exclude people of color." In 2017, actual “white supremacists” are not required in order to uphold white supremacist culture. Building a faith full of people who understand that key distinction is essential as we work toward a more just society in difficult political times.”  I know the term white supremacy is provocative and uncomfortable, but it in this discomfort that there can be learning.
Why a Teach In?  Some months ago Hispanic UU DRE Christina Rivera who had been a finalist for a regional leadership position in our denomination was told she was not hired because she was not a good fit.  She writes in her blog:
“No, I’m not going to be a “good fit’ and that’s what’s wrong with the UUA
In the past few days it has become known that yet another UUA hiring decision has left the upper levels of leadership as white as ever. For the 3rd time within as many years, a Regional Lead position was filled with a white minister and for the second time with a white male minister.
What was not known publicly until now is that I was a final candidate for the position.
I do not reveal this lightly…in fact it is with real fear that I am jeopardizing any future career within UU communities. But as I consider what has happened, I keep coming back to the thought that if they weren’t willing to hire me for this position then what makes me think that will change for any theoretical future? And ultimately how do we hold the UUA accountable for racial discrimination and upholding white supremacy if no one stands up in the public square and says ‘me, it was me, you did this to me and it is not ok, I demand you make this right!’
And lest, as you read this, your white supremacy tries to intervene, yes I am fully qualified for the position (but perhaps you should ask yourself why that was your initial reaction.) During my final conversation with the hiring manager I confirmed with him that in his words “I believe you are ready to step into this position as is, I didn’t want you to think that I thought you would need to grow into the job.” And also was told that the deciding factor would be ‘…needing to make a decision about the right fit for the team.’”
After this blog post, many Unitarian Universalists around the country saw with new eyes that virtually all the hired positions of leadership are held by white people, and many ware white ministers and most are white male ministers. The president, the Chief Operating Officer and the Director of Congregational Life of our denomination, and Friday the executive director of the UU minister’s association resigned over this issue.  And so our denomination is asking all our congregations to reflect on hiring practices and white supremacy in the church culture.  Black Live Unitarian Universalist, a group of African American UUs, created a curriculum of readings, chalice lightings and other worship materials to help congregations provide this Teach In.

What is White Privilege?  Most of you have probably heard the term “white privilege”.  This privilege based on a culture in the country which affirms and promotes white supremacy—in other words, being white in this country is better than being any other race.  Here are some of the privileges of white supremacy in this country:
*When I cut my finger and go to my school or office’s first aid kit, the flesh-colored band-aid generally matches my skin tone, white.
• When I stay in a hotel, the complimentary shampoo generally works with the texture of my hair, white.
• Store security personnel or law enforcement officers do not harass me, pull me over or follow me because of my race, races other than white.
*the schools that I attend or have attended use standard textbooks, which widely reflect people of my color, white people, and their contributions to the world.
• When I look at a dollar or a ten dollar or any dollar bill I see photographs of monuments on the National Mall in Washington, D.C. and I see people of my race, white, widely represented and celebrated.
Professor of Law and Professor of African American Studies and Ethnic Studies at the University of California, Berkeley School of Law, John A. Powell wrote:
“The invisibility of whiteness means that one doesn't have to notice that one is white. So there are people, and then there are black people. There are people and there are Latino people. And people—just people, just folks—turn out to be white, but we don't notice it.
White people have the luxury of not having to think about race. That is a benefit of being white, of being part of the dominant group. Just like men don't have to think about gender. The system works for you, and you don't have to think about it.
So they live in white space and then they don't have to think about it. First of all, they think about race as something that belongs to somebody else. The blacks have race; maybe Latinos have race; maybe Asians have race. But they're just white. They're just people. That's part of being white.”

Our UU 7 Principles: Unitarian Universalist congregations affirm and promote:
1st Principle: The inherent worth and dignity of every person;
2nd Principle: Justice, equity and compassion in human relations;
3rd Principle: Acceptance of one another and encouragement to spiritual growth in our  congregations;
4th Principle: A free and responsible search for truth and meaning;
5th Principle: The right of conscience and the use of the democratic process within our congregations and in society at large;
6th Principle: The goal of world community with peace, liberty, and justice for all;
7th Principle: Respect for the interdependent web of all existence of which we are a part.
Black Live UU Response to the UU Principles
Principle #1 : All Black Lives Matter.
Queer Black lives, Trans Black lives, formerly incarcerated Black lives, differently-abled Black lives, Black women’s lives, immigrant black lives, Black elderly and children’s lives. ALL BLACK LIVES MATTER and are creators of this space. We throw no one under the bus. We rise together.
The Movement for Black Lives calls on the Unitarian Universalist faith — a faith willing to make the bold proclamation that each person inherently matters — to live up to that claim by working toward a future in which black lives are truly valued in our society. We call on UUs to actively resist notions that black lives only matter if conformed to white, middle-class norms, and to challenge assumptions of worth centered around clothing, diction, education, or other status. Our value is not conditional.
Principle #2 : Love / Self-Love is practiced in every element of all we do.
Love and Self-Love must be drivers of all our work and indicators of our success. Without this principle and without healing, we will harm each other and undermine our movement.
The Movement for Black Lives seeks to build a society where black people thrive instead of survive. We seek justice for those we have lost to police violence, we seek equity in housing, education and healthcare, we seek compassion from our fellow UU’s for the struggle we are called to be a part of.
Principle #3: Spiritual growth is directly tied to our ability to embrace our whole selves.
A principled struggle must exist in a positive environment. We must be honest with one another by embracing direct, loving communication & acknowledgment of all that we are and all that we hope to be.
The spiritual growth of UU’s of Color is directly tied to our ability to stand in the truth that black lives matter, that our lives matter, both in the wider world and just as importantly in our UU congregations. We call on our UU congregations and the UUA to support our work towards wholeness as black people. We must be honest with one another by embracing direct, loving communication.
Principle #4: Experimentation and innovation must be built into our work.
Embrace the best tools, practices, and tactics, and leave behind those that no longer serve us. Evaluation and assessment must be built into our work. Critical reflection must be part of all our work. We learn from our mistakes and our victories.
The Movement for Black Lives works daily to expose the truth about Black life in this country and in the world. To uncover the layer of Supremacy that exists in this society. To bring to light to the Anti-Blackness that is present in our everyday lives. We call on all UU’s to root out the Anti-Blackness that exists within our congregations and our faith.
Principle #5: Most Directly Affected people are experts at their own lives.
Those most directly affected by racial injustice & oppression should be in leadership, at the center of our movement, and telling their stories directly
We stand in the Movement for Black Lives at a time in which voting rights are being threatened at every turn. Black people are being denied the most basic of rights — the right to vote and have adequate representation in our country. We work towards a society in which Black Life is valued, in which Black Life is not discarded, in which Black Life Matters, and in which the work of Black people is seen as equal to their white counterparts. Black voices in our congregations, in our faith, and in the world must be valued.
Principle #6: Thriving instead of Surviving
Our vision is based on the word we want, and not the world we are currently in. We seek to transform, not simply to react. We want our people to thrive, not just exist — and to think beyond the possible.
Any work towards peace, liberty and justice must address racial injustice. Black UU’s are calling our faith to join us as we work towards justice for ALL Black people and by extension for all people.
Principle #7: 360 degree vision
We honor the past struggles and wisdom from our elders. The work we do today builds the foundations of movements of tomorrow. We consider our mark on future generations.
Acknowledging the ways in which a Supremacist society diminishes us ALL is a critical part of the work of the Movement for Black Lives. When the most marginalized of our society is free, then we will ALL truly be free. We call on our faith to affirm the truth that only when Black Lives Matter will All Lives TRULY Matter. As Dr. King said, “Injustice anywhere is a threat to justice everywhere. We are caught in an inescapable network of mutuality, tied in a single garment of destiny. Whatever affects one directly, affects all indirectly.” 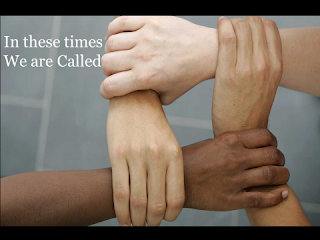