“All I have to do is look at the table of contents in The Feminine Mystique, written by Betty Friedan and first published in 1963, and I quickly drop back inside myself to 1967, when I first read the book. We were living in South Bend, Indiana, in a large rented home. Tom had an interim professorship at Notre Dame and our four daughters ranged in age from 12 to 3. Caring for them and keeping a home were my primary—and only—jobs. I was doing the best I could to be happy in motherhood and wifehood, taking care of others. I knew something was missing; I had known that for quite a while. Even though I had a college degree, being a wife and mother were supposed to be enough. Some joked that the “M.R.S” degree was all we needed. Still, I was restless, anxious and aimless.

And then I read the book. The first chapter of The Feminine Mystique is titled “The Problem That Has No Name.” I remember being curled up in the over-stuffed chair in the living room, our daughters either in school or napping, my eyes glued to the pages where she had captured my life experience and questions.  “Who am I? Do I really exist at all? Why do I feel like crying all the time? What’s wrong with me? Is this all there is?”  In this book—and others that followed—I saw that my personal challenges were part of a huge collective experience just being uncovered. There were so MANY of us in the 1950s and ‘60s who thought marriage and children would bring life-time fulfillment and found otherwise. In consciousness-raising groups we were talking about it.

Unformed as I was in 1967, I knew that my life was going to change. There was more to me than I knew, and I was going to discover what that was. By 1975 I was a committed feminist, had a Master’s degree in Counseling Psychology, and a seedling sense of self. The questions? As Rilke writes, I was “living my way into the answers.” Not easy, but necessary.

My understanding of feminist theology tells me I have the right to define my life. I can discern how to grow into my potential. Further, my personal experience is to be valued, and shared when I wish. My personal need and desire to grow, and my belief I had a right and responsibility to live into my potential intersects with feminist theology. So does my ongoing experience that my creativity enables me to be a catalyst for others. In very long hindsight I see that I went from not having a self and living through others, to learning and acting on what mattered to me and navigating my way in the world as a self-defining woman. Later in my life, when the psychological quest morphed into a spiritual quest, further evolving  brought me to my Self—the capital “S” standing for a deep, soulful ground inside of me which is loving, available, and a source of sustenance for myself and to others.” 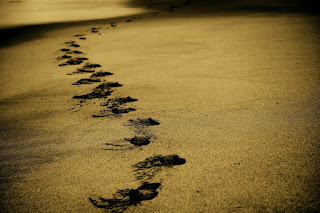 The Legend of Tokoyo, The Samurai’s Daughter

One fateful day, a samurai (who was the envy of many because of his skills) was framed; someone has made the Emperor ill and weak, and started the rumor that the samurai had poisoned the Emperor.  And so the samurai was banished to a faraway island.
Tokoyo, the samurai’s loving daughter, became miserable; she loved her father so much. She was very determined to be reunited with the only family she had left, so she set out on a journey to find and rescue him. 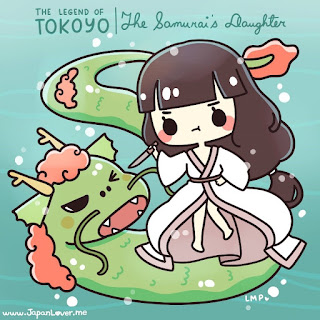 First, she sold all of their possessions to a merchant to gain money for the journey. She journeyed long and far towards the coastline, where in the light of day, the faraway island can be seen very dimly.
She tried to persuade the fishermen to bring her to the island, but she didn’t have enough money left to pay for the trip, so they refused to take her. Still, she never gave up. That night, she found a small, old boat on the bay, and she set sail for the island.

It was a hard journey in the small boat, but it was nothing for the valiant Tokoyo. It was still dark when she arrived shore, and she spent all day looking for her father on that island, but failed.
Night came, and a very tired and sad Tokoyo decided to rest under a tree.

After a few hours, she was awakened by the sound of a sobbing girl.  Tokoyo hid behind a bush, and saw a girl dressed in a white robe standing with a priest. They were on the edge of a cliff, and the priest was in the act of pushing the girl off of it.

Tokoyo came out from the bushes to rescue the girl. The priest paused and explained to Tokoyo what he was doing.

Apparently, an ancient serpent-dragon called Yofune-Nushi inhabited the seas around the island. Yofune-Nushi threatened to terrorize the people on the island and destroy the fishing industry (the island-people's only source of income), unless they sacrifice a virgin girl to him every year.

It was said that as long as they kept their end of the bargain, the dragon would leave the town alone.

Feeling that this was very unjust, Tokoyo offered to take the girl's place. She wore the girl's white offering dress and jumped down from the cliff, diving into the ocean with a dagger in her teeth, much to the amazement of the priest and the girl.

Tokoyo dived deeper and deeper, until she found a cave. Above the mouth of the cave was a small statue of the Emperor. Out of her anger towards the Emperor, she took the statue to destroy it. But after some reflection decided it would be better to take it up on the shore to destroy rather than trying to break it underwater, so she tied it to her belt.

Suddenly, the dragon. Yofune-Nushi came out from the cave. He assumed that Tokoyo was the offering, so he attacked her. Tokoyo quickly put up her defenses and blocked the attack.  Then Tokoyo plunged her dagger into the dragon’s eye.

Blinded, the dragon made his way back into the cave, but Tokoyo chased after him. Again, the dragon put up a fight, but the brave Tokoyo continued to attack him!

At last, when the vile Yofune-Nushi was killed, Tokoyo dragged him up on the shore, where she slumped on the sand.  She was weak and tired after such a great fight.

The priest and the girl ran towards her; they couldn't believe she beat the dragon. The priest carried Tokoyo back to the village, where the news of her heroism spread like wildfire.

Realizing that Tokoyo's father was innocent, the Emperor released him from banishment and brought him back home to his daughter. The Emperor regretted banishing his best samurai, so he gave Tokoyo and her father a huge sum of rewards and treasures.
Tokoyo was also given the privilege to serve at the palace as a samurai warrior alongside her father, and they lived happily ever after. 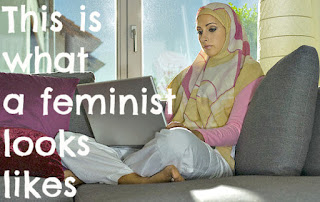 (Rev. Tom chose to softened the profanity in the poem for the worship service.)


“This one is for you.
For the dream seekers and the rebels, the ones who not only don’t fit into the mold—they … break it as well.

This is for the women who do give a …[damn].

We know that we weren’t born to play life small, and while life has tried to smack us down at times, we stand right back up asking—is that all you’ve got?

This is for the women …[willing] to be themselves—unapologetically…willing to risk, to go after what we love. 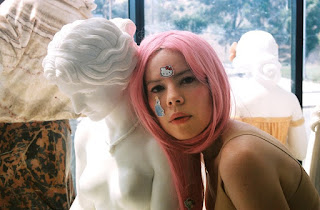 This is for the women who stay up late chasing dreams, and are up early with the sun making them a reality.

This is for those women with thirsty hearts and messy hair—the ones who march to the beat of our hearts and often find ourselves alone because of our choices.

This one is for you, for me, and for all the women who often wonder if they are alone in their individuality.

And although we are as unique as they come, we all are linked because of the desire to break free from the expectation that we need to be well-behaved women in order to be loved.
We can’t follow the rules for the life of us. 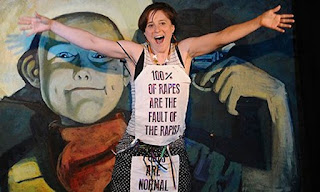 When given the choice we always choose the most difficult road, because that is where we often learn the most.

This is for the women who take care of themselves. We are masters at keeping our [act] together, even when it seems we can’t take one more step.

This is for the women who tuck themselves into bed each night. It’s not because we don’t want a lover with us, but because we know that, unless it’s genuine, solitude is so much sweeter than putting on an act.

This is for the women who just won’t conform no matter how many times people shake their heads at us. 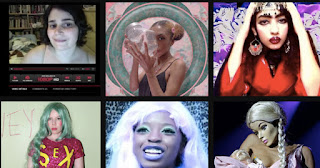 These are the women who drink moonshine underneath the stars with their bare feet dirty, and their eyes wild dreaming of their next adventure.

The women who prefer to be untamed. We don’t care about letting our crazy show because we know it’s just as seductive as the pull of our eyes.

This is for all the women who’ve had people ask why we can’t just be like everyone else. Why can’t we stay in unhappy relationships? Why can’t we just stay with the secure job? Why can’t we just suck it up because we are adults? That is what adults are supposed to do.
But we were born differently. Where others see stability, we see stifling. 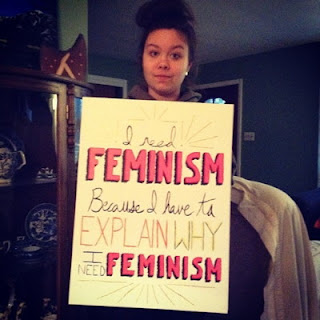 “We dream of a life that fills us with inspiration, and we dream of a love that even time will lie down and be still for.” (~ Alice Hoffman)

We don’t know how to give up on the desires of our hearts.

And while we may seem to wander aimlessly at times, it’s all part of our un-plan. Because some are just born to be the movers and shakers in this life—to rattle and shake things up a bit.
And while we may drive you crazy at times, and scare the …[snot] out of you at others, life would be boring without us.

For we are the wild ones—the ones who make life worth living.”