Healing or Curing: What do we do about Politization in the USA? by Reverend Tom Capo 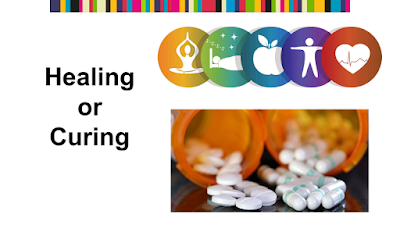 As many of you know I was a psychotherapist before being called to ministry.  In order to get compensated for my work with clients by insurance companies, I had to use the medical model of diagnosis and treatment.  I struggled as did Dr. Lisa Rankin when I realized that "Curing means "eliminating all evidence of disease," while healing means "becoming whole…[and] most health conditions are not so easily cured."  In my case I was working with emotional issues, patterns of behavior, family systems, and the concept of curing never really made sense to me.  I will talk more about healing the mind next week with Shae, our ministerial intern.

This relationship between of healing and curing has come has come into sharper focus for me as I have thought about what our country faces right now.  I am wondering about the systemic issues that are tearing us apart as people, particularly politicizing issues like Covid-19, racism, LGBTQ rights, women's rights, indigenous people's rights, even the rights of people to protest are at risk.  If you don't know what I am talking about regarding protest, check out what DeSantis is up to in Talahasee with Anti-mob Stand Your Ground Gun Bill, you should check.  This Bill would target people accused, accused of illegal acts during riots and looting.  This Bill proposes that physical force, including lethal options, can be used against anyone suspected of illegal acts, not by police, but just by any citizen.  Do you think this will calm down or escalate violence at a rally or protest in Florida?  What will, what can we do about all these?  Can they be cured?  Can they be healed?

Instead of dealing with issues such Covid 19 or racism, or managing peaceful protests through peaceful means, as a collective body, as a community trying to work on these issues through the lens of human rights, we now seem to deal with them as if they are Republican or Democratic issues.  It seems the way we choose to deal with them in turn affirms our loyalty to one party or another.   I want to heal the pain in our country caused by this politicizing, but there is also a part of me that wants to cure this problem of politicizing, "to eliminate all evidence of" it.

When I lived in Iowa, I attended a lecture by two Iowa state legislators.  This image is the Iowa state legislature in session.  Both had just retired from the legislature and were discussing their experiences.  One had been a legislator for 20 or so years, the other has only served one term.  One Democrat, one Republican.  The legislator who had served one term said something surprising; he said that the reason he didn't serve a second term was because as he was preparing for to run for another term, his party leadership told him that he would have to say terrible, awful, no good lies about the person he was running against.  He refused to do so and decided to retire instead.  The other retired legislator, the one who had served 20 plus years, shook his head and said he had been pressured by his party to do the same thing, and had always hated that aspect of being in politics.   Two very capable legislators pressured by their own party to act unethically; it was hard for me to understand.

I know we have seen too many political ads recently and very few of them were about issues or positions.  The vast majority of these ads spread lies about political opponents designed to shock and awe.  The past election season Martha and I turned off the sound during these commercials, not wanting to expose ourselves to such negativity.  Can't this be inevitably cured, eradicated?  Can't we just stop this kind of political discourse?

I know radically reconfiguring the way the political season seems to wallow in the gutter would take political will and I am not sure there is such will in Washington, DC or in any of our state legislatures right now, but I know many people are sick of it.  I think the first presidential debate between Biden and Trump pushed many people beyond the brink of bearing.  Trump bullying and interrupting and both of them saying unkind things to each other.  As I watched the commentary on ABC and CNN after this debate, some of the commentators were receiving texts from friends and colleagues about children who were asked to watch the debate for school credit or because their parents felt it would be an important experience for them and the children were traumatized by what they saw and heard.  Is this what we want our children to carry within them about our political system? About our president or other legislators?

Do the people of this country need healing or curing from all this politicizing?  What do you think? The story I will tell at the end of the service for the children did make me wonder.  It is a story of a girl with a very terrible disease.  This disease made her friends afraid to be around her.  She is lonely and sick.   A minister, a doctor, and a magician come to visit her in hopes of curing her.  The minister tries using prayer, the doctor tries using medicine, the magician tries using magic.  None of them find a cure.  But the girl says that they gave her what she needed: love, friendship, and company.  Perhaps these helped heal the pain she was in.  But here is the peculiar ending, "the doctor, the minister, and the magician gathered around the little girl and laid their hands upon her. In the silence that followed, it is said that they found the cure."  What do you take away from that ending?  What the heck was the cure?  And how can I get some of that?

I am still in a quandary over whether this country needs healing or a cure or both.  Perhaps it is both and.  It is certainly true that healing is needed in our hearts, minds, bodies, souls for what we have gone through with all the politization of Covid-19, racism, immigration, women's rights, LGBTQ rights?  If there is a cure what would it be?  Where could we look?

Let me tell you of two friends of mine.  Sadia Covert and Reverend Al Sharp.

Sadia, who is now on the DuPage County Board, is a member of a suburban Mosque outside of Chicago.  Her mosque was attacked a few years ago and she began to wonder about how the law in Illinois dealt with hate crimes.  And hers was not the only faith community attacked in the greater Chicago area.  Not long after midnight on February 3, 2017, a man smashed the glass entrance of the Chicago Loop Synagogue and placed two swastika stickers on its door.  That same week the synagogue was vandalized, residents of several south suburban and central Illinois communities discovered Ku Klux Klan recruitment fliers at their doorstep.   Sadia made it her mission to craft and get passed a new hate crime bill in Illinois.  The bill she crafted had specific consequences for hate crimes and this new law would make it much easier for the police and the courts to understand just exactly what constituted a hate crime.  She was able to accomplish getting her bill passed with the help of many allies from across the political spectrum.  It is now the law in Illinois.

And Reverend Sharp has been working all over the country to get bills passed for legal medical cannabis and cannabis laws passed have social justice components.  Last year, in Illinois, with the work he and many allies did, a law was passed that legalized cannabis use, but more importantly the social justice components were included in the that law.  For the first time in the United States, a cannabis bill included a stipulation that would result in 770,000 individuals with cannabis records to qualify to have criminal histories removed.  And this bill included an increase in money for social development in areas that have been disproportionally affected by high rates of arrest, conviction, and incarceration related to cannabis-related offenses.

I bring up Al and Sadia because any one of us could do what they did, with allies and motivation.  Did they achieve cures?  Well, it certainly seems what they accomplished was more than healing; it feels like it's moving us toward eradication of a problem.  Healing includes more heartfelt, ongoing actions that treat the effects of a disease.  Curing takes more direct action to make change happen, to eradicate the disease.

Do you know the myth of the babies and the river?  The people in some unknown town next to some river saw babies floating down the river.  The people saved the babies, set up programs to feed, clothe, and care for the babies.  One day someone in the town finally asked where are all the babies coming from.  Healing is about taking care of the babies.  Curing is about going up river and dealing with what is causing all the babies to be put in the river in the first place.  At least to me curing is about changing the systems that underlie or support the problems – racism is a good example of this.  What are the systems and laws that support racism and white supremacy?  Want a cure?  Deal with not only the effect but the causes.

Earlier this year members of the UU Miami Social Justice Committee decided to work on the recent election.  And so many members of this congregation did phonebanking, poll watching, and ballot curing.  There's that word again.  We even put on a concert—during a pandemic, during quarantine-- to support these efforts.  That was amazing! Now that the election is over, it is time for us to consider what our next priority will be.  Perhaps it will be addressing some component of antiracism or the increase in hate crimes or the Anti-mob Stand Your Ground Gun Bill or gun violence or climate change.  The Social Justice Committee will meet at 12:30 PM next Sunday, November 22nd.  If you feel the call to heal or cure, to lobby or protest, to work for equity and justice, please join us.  The zoom link registration is on our webpage uumiami.org.

One of our forebears, Unitarian Reverend Theodore Parker, said that "I do not pretend to understand the moral universe; the arc is a long one…But from what I see I am sure it bends toward justice."  Unitarian Universalist Reverend Richard Gilbert reminds us that "the bending, however, is not automatic, nor is it inexorable.  It is dependent on people who feel compassion, equity and justice as imperatives of their faith."  And Unitarian Universalist Reverend Tom Owen-Towle reminds us that if we feel compassion, equity and justice are imperatives, we will need to "keep the pressure on, we must remain attentive, we must dialogue and dance, meditate and march, we must repent and resist.  We must risk more passion and quit trying to be so damn logical about injustice."  My friends, together we can, and together we will, with a little more passion and without trying to be so damn logical, keep that moral arc bent toward justice.

Posted by The Human Spirit at 5:04 PM