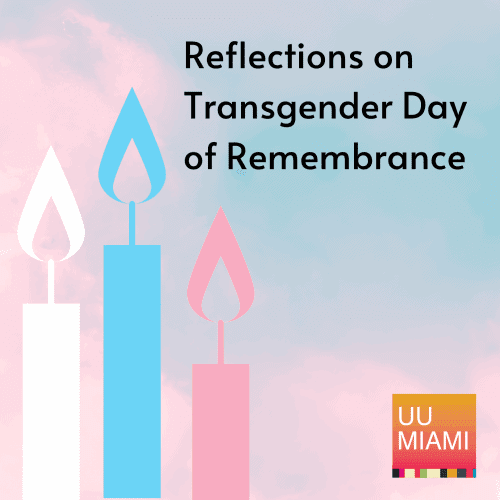 I want to start with this poem called "Every Note" by Rev. Aaron Miller.   Rev. Aaron is the pastor of  Metropolitan Community Church in Hartford, Connecticut, a Welcoming and Affirming Community.  Rev. Aaron is a political activist who is dedicated to working for the advancement of LGBTQI justice and equality.  As a transgender clergy person, he is passionately committed to human and civil rights and creating safe and welcoming spaces in our faith communities

Like a note in a song, we are each essential.

A beat cannot be skipped without interrupting the song’s rhythm and cadence.

Would we say one note is wrong, unnecessary or has less value than another...

when the song is so beautiful that it touches our hearts and compels us to sing along?

Different since birth, the transgender experience has been, at times,

difficult, isolating, and even painful in a world that does not seek to understand.

Arms did not reach for me.

No band aids were offered to protect my spirit and to heal my soul.

I was not accepted as one of the boys and I definitely was not a girl.

I was a note in the wrong song.

I cried out to God “Why did you create me so differently?”

In the quiet of the sanctuary I had created...something stirred.

“You are a note in the song that I am singing”

I answered “Why then am I so different?”

And, God said “You are a beautiful note that creates the harmony in my song ---

a song that you call humanity.

Melody and harmony need each other

to create something new and beautiful together.

So, play your note with joy, my child.

You are part of a song that is not yet complete.

Look and you will see...hearts opening to this beautiful song.

Some are even compelled to sing along.

I ask that you have faith enough to trust the Songwriter

For you are my beloved.

And, your note is beautiful and essential----to Me.”

I was on a Zoom call with a number of Unitarian Universalist ministers last week.  We were checking in and chatting.  One clergy told us what they were doing in their spare time.  They were taking a course in studying the Bible through a Transgender lens.  They were finding it eye-opening, considering passages in ways they would never had thought of as a cis gendered heterosexual person. They didn't go into detail about what they learned, but I started to consider what possible blinders that I might have on that keep me from seeing, hearing, experiencing the world through a Transgender lens.

In our Decentering Whiteness book club, we got into a discussion about seeing the world through different lenses.  And it came down to needing someone else, someone who is different from us someone who is not white, sharing what it is like to live in their shoes, to see the world as they see it.  The book we are reading is A Black Women's History of the United States.  And one of interesting parts of this non-fiction history is that the authors, two black college professors, speculate throughout the book on what the feelings and motivations and thoughts might be running through the minds and hearts of the black American fore-women.  This speculation drew us readers in, helped us experience empathy, helped us step into what these black women were experiencing.  I want to take a moment here to acknowledge that it is natural for people to see the world through their own lenses.  If you're white, what we're talking about here is not about tearing down your worldview and supplanting it with another.  We're talking about expanding a worldview to include another.

I began to consider how I do can expand my worldview to encompass the experiences of a Trans-person.  How can I begin to understand what they have to endure in order to live authentically in the world, a world with so much prejudice toward them, so much emotional and physical abuse, so many killed?  How can I reach out to the trans community, knowing so many of them have been rejected by religious institutions and so-called people of faith?  How can I be an ally?

Several years ago I made a transgender friend while we were both on a panel discussion on LGBTQ inclusivity at a Jr. High School PTA meeting.  At first the panelists talked about their experiences, both personal and as allies to the LGBTQ community.  Then we offered some advice to parents on how to support their children if they came out to the family.  This was a challenging conversation, but I noticed the Trans-woman on the panel handled all these questions with a calm presence.  After the panel discussion was over, I went over to her if we could exchange business cards and I told her that I would love for her to come and talk to my church.  She gave me her card.  She was the president of a local chess club.  I got quite excited and asked if I could join the club, I didn't have anyone to play chess with.  And friendship started over a chess board.  I tell you this because, our friendship was not based on her identity or her willingness to do activism with me.  It was based on a common interest and spending time with one another.  Like any other friendship.  Sometimes allyship looks a lot like making a friend.

Getting to know someone fosters connection and empathy.  Getting to know someone who is not like you fosters true community.  Trans people aren't two dimensional characters; they're people.  I took time to read over the stories of the Transgender persons who were killed this year.  Each story broke my heart.

There were 46 Transgender persons killed this year.  46 names.  More than any other year since the list began.  Let me read about one of them.  "Bianca 'Muffin' Bankz [who was fatally shot by a man who later took his own life] was 30 years old.  Bankz was a former foster child who was 'just blossoming into herself,' Jesse Pratt López, founder and co-director of the Trans Housing Coalition, said at a memorial vigil last week. “Muffin hadn’t been in the apartment for … even a month, and we were helping her get a job. We actually had the job interview scheduled for her the day after she died,” López said.  Bankz, who acquired her nickname due to her love of blueberry muffins, hoped to one day compete on RuPaul’s Drag Race, friends said. Her friend, Angel Karmarain, recalled her as “sweet and kind.”

I invite you to take a few moments to think about Bianca's life—coming up through the foster care system, finally blossoming into herself, excited about the prospect of a new job.  I ask you not to think of her as a statistic. I ask you not to  give lip service to her murder by saying.  "I am so sorry that happened to her", before moving on to the next thing.  I also ask you to consider what you heard from Camille today, and consider how it touched you.  I encourage you to talk with Camille after the service.  Then ask yourself what next steps might you be willing to mtke, personally and as a congregation to ensure a Transgender person feels welcomed and safe.  Here are ideas that might be starting places (from UUA website):

Do not assume a trans person wants to speak about trans issues and only trans issues. Engage them in conversation and get to know them as you would anyone. Learn more about transgender identity and gender diversity on your own.  Recognize that a person can identify with more than one of those labels.

Talk to children about gender diversity. Provide age-appropriate education around understanding one’s gender identity and how gender roles and norms play out in our society.

Designate gender neutral bathroom(s) and label all bathrooms in a welcoming way. Make sure your signs throughout your space point the way to all bathroom options.

Learn about local and federal laws and how to change them if they are not inclusive. Follow the leadership of local and national transgender organizations on their social justice concerns.

And so I will not tell you,

That there is no reason to be angry,

That you must be optimistic

I cannot pretend these things,

And so I won't tell them to you.

But what I will say is, as we make our way in the world, as we continue to open our hearts to the Transgender Community, with an awareness of the suffering that they are experiencing, There is a Love—in us, in those around us, abundant love, a Love holding us, a Love holding us all.  We need to be expressions of that love to any who enter the doors of this church.