What the heck is our Circle? by Reverend Tom Capo preached on 2/6/2022 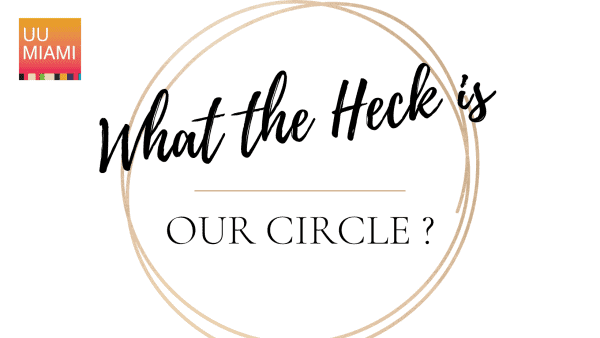 The worship theme this month is "Widening the Circle." As I reflected on the theme, I thought, "Before we decide how to widen the circle, shouldn't we think about what the heck our circle is?"  And consider which circle we are even talking about.  Are we talking about a circle of concern, in other words, who we are concerned about?  Are we talking about the people here in this congregation or the people who are marginalized, being treated as "less than" by others in our white supremacist culture?  Are we talking about our circle of ideas/values/beliefs?  Many Unitarian Universalists are considering whether to change the Principles and Sources document so that it better reflects who Unitarian Universalists are in the 21st century, and in the process perhaps adding a new Principle, an Eighth Principle, that explicitly calls us to consider antiracism and anti-oppression whenever we make decisions about direction or resource allocation.  Or are we talking about widening the circle of vision beyond our narrow view of the world?  Are we being encouraged to engage with people who are different than us so that we might better understand the complexities of the world we live in?

As I started down this path, I began wonder not only what is our circle, but are there boundaries to our circle and are those boundaries rigid, permeable, semi-permeable, completely open.  Are our circles small or large, deep or shallow, two dimensional or three dimensional?  Are our circles like balloons that can expand and expand until they pop?  Or are they pulsing and slightly shifting in shape depending on what may be happening in the moment?  For instance, how prepared are we to widen the circle of who is welcomed into this community?  Is it anyone who walks into these doors?  What about Proud Boys, Nazis, sexual predators, drug addicts, the homeless?  I began to feel like the fox in the story earlier, running around and around with a million ideas without choosing one of them to implement before time is up.  But I also am not completely in sympathy with the crane either.  Yes, one idea can be effective and may seem salvific, but one idea, much of the time, is really not enough for me.  And one idea that saves me but does nothing to save the other being that is with me, well that doesn't seem very Unitarian Universalist either.  For many Unitarian Universalists like me, one idea, one value, one belief has never been enough, especially if it is completely centered on me.  We affirm that revelation is not sealed, that we are constantly learning and growing, opening ourselves to transformation, and expanding our understanding of this complex, multifaceted, multicultural world we live in.

Last week, I attended the Unitarian Universalist Minister's Association 2022 Institute for the Learning Ministry —a week of educational enrichment with close to 200 UU ministers from all over the country.  After the first worship service, two theme speakers presented their thoughts on Widening the Circle.  They were

Benjamin Valentin, Professor of Theology and Latinx Studies at Boston College and Anthony B. Pinn, a Rice University professor working at the intersections of African-American religion, constructive theology, and humanist thought.

Valentin spoke first.  He has been considering widening the circle from the perspective of place.  He asked where exactly was this idea, value, belief born?  Not in the intellectual place, not books or classes or lectures, but in the culture and people in one's life that birthed that idea, value, belief.  He spoke passionately about how he recently started expanding his view of the world by considering the places that we live and the other places that have influenced us.  He grew up in Spanish Harlem and is looking more deeply into the influence this place – the space, the buildings, the culture, the weather, the privileges, the hardships, natural features, sounds, smells, the people—had on him.  His theological work is now centered on understanding the epistemic—the valid, significant-- power of place.  He asks us to consider widening the circle by looking within, considering the places we carry within us, physically, cognitively, emotionally, and spiritually, consciously and unconsciously with the goal of understanding that the decisions we make, the path we take, the beliefs and values we choose are influenced in subtle and not so subtle ways by place.  So even as we here at the Unitarian Universalist Congregation of Miami look toward widening the circle, perhaps we should consider the history of this place, this building, our grounds, the people who have been here before. How have all these influenced our ideas, beliefs, values? How do each of our own personal places that we carry within influence this community?  Are these important to consider?  Well, Valentin would say yes.  Places carry weight, impact values, are the basis of the claims we make about meaning, purpose, mission, vision, direction.

Next up was Anthony B. Pinn.  I was still processing Valentin's thoughts and wondering about how growing up in a middle-class white, mostly Catholic neighborhood in Houston, Texas impacts my ideas, beliefs, and values, when Pinn blew my mind, perhaps it is better to say widened my circle farther than I thought possible.  First he shared that he was with his people when he was with Unitarian Universalists, though he formally left Unitarian Universalism in the late 60's. Then he shared his definitions of imagination and fantasy.  I wondered, where the heck is he going.  He said imagination is certainly about considering things differently, but usually within a certain framework, a certain circle if you will.  But fantasy can be more expansive, bring about more possibilities, with fewer boundaries or limitations.  Fantasy challenges tradition, considers ideas/beliefs/values with less certainty.  He then he told the story of Lot from the Jewish Bible.  For those of you who don't know the story, Lot lived in Sodom, a place of many evils and depravity.  God decided to destroy Sodom if his angels couldn't find 50 people there who were righteous.  In Genesis, it says: "And the two angels came to Sodom in the evening; and Lot sat in the gate of Sodom; and Lot saw them, and rose up to meet them; and he fell down on his face to the earth; and he said: 'Behold now, my lords, turn aside, I pray you, into your servant's house, and tarry all night, and wash your feet, and ye shall rise up early, and go on your way.' And they said: 'Nay; but we will abide in the broad place all night.' And he urged them greatly; and they turned in unto him, and entered into his house; and he made them a feast, and did bake unleavened bread, and they did eat."  Lot bargained with the angels to save his family, and one of the often glossed over aspects of this bargaining, I know may be painful to hear, is that he offered to pimp out his virgin daughters.  The angels decided that Lot and his family would be spared, and sent them out of the city, while God rained down sulfur on Sodom and Gomorrah.  The angels told Lot and his family to not turn around and look at the destruction.  But Lot's wife did turn and became a pillar of salt.  What do you imagine that this story is supposed to teach?  What do you think Jesus meant when he said, "Remember Lot's wife"?  That she somehow unworthy in God's or Jesus's eyes?  Or that people shouldn't disobey God?

Well, instead of imagining, Pinn suggests we use fantasy to think about Lot's wife.  Perhaps Lot's wife knows that her future would be no better than her past with a man who would exploit and objectify his daughters, or living a life where she couldn't bargain for herself. Lot was the only one who could bargain with the angels for his family.  Perhaps her turn was about defying tradition or the patriarchy, or perhaps embracing self-empowerment.  Perhaps Lot's wife owns her own body when she turns, perhaps for the first time.

Well, I was just trying to take all this in, when Pinn started talking about fantasizing Unitarian Universalist worship.  I thought "where the heck is he going".  My circle had already been widened, and my balloon of Unitarian Universalist ideas, traditions, ritual would pop if he went too much further.  And yet he did go further.  He called us to worship as Unitarian Universalists not as Protestant Christians.  He urged us to fantasize what worship might be with all of the potential of Unitarian Universalist ideas/values/beliefs.  Maybe worship might not necessarily happen on a Sunday.  Maybe it wouldn't necessarily have a sermon, or hymns, or offerings, or prelude or postlude.  What would that look like?  What could that be like?  What if worship were based on the needs, feelings and spirituality of the people present?  Or based on changing ideas, hearts, the world?  What could that be?  What wisdom, surprises, feelings, transformations might happen if we were to remove the barriers of Protestant tradition and open ourselves to radical inclusivity?  He hopes that we embrace this fantasy--for the future of Unitarian Universalism and with, at least in part, the purpose of growing our faith.

Widening the circle is not about being either the fox or the crane.  It is calling us to open up to possibility and live into that possibility.  To experiment, to fail, to succeed, to be overwhelmed and underwhelmed all with the purpose of moving toward something fantastical.  To move our bodies even if we might turn to salt when we do.  To consider our past and trust the dawning future more.  Where the heck is our circle?  Well, that is for us to decide together as a community and then maybe to choose to move beyond it.

I leave you with this poem by Adrienne Maree Brown, writer-in-residence at the Emergent Strategy Ideation Institute (ESII), cohost of How to Survive the End of the World, and emergent strategy facilitator:

There is an edge

Beyond which we cannot grasp the scale

The only known edge of existence

The only one we can prove by universal experience –

We can imagine so much!

We can only imagine so much.

If perhaps it is a function of our collective minds

A dream of our endless nights

If we can imagine it

Or abundance of earths

A sphere for every tribe

And to have it all

All we need is to remember

there is an edge

And grow our dreams beyond it.

Posted by The Human Spirit at 1:16 PM