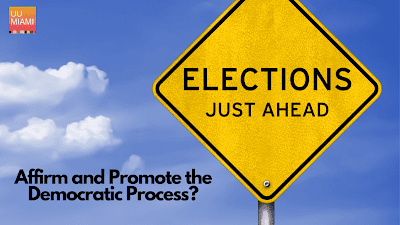 During many of the past electoral seasons, I have pulled out Parker Palmer’s “Healing the Heart of Democracy” to read the passage you heard this morning.  In particular I reflect on these words: “Looking at politics through the eye of the heart can liberate us from seeing it as a chess game of moves and countermoves or a shell game for seizing power or a blame game of whack-a-mole. Rightly understood, politics is no game at all. It is the ancient and honorable human endeavor of creating a community in which the weak as well as the strong can flourish [and so too can] love…   And [where] power can collaborate, and justice and mercy can have their day.  ‘We the people’ must build a political life rooted in the commonwealth of compassion and creativity [that is] still found among us, becoming a civic community sufficiently united to know our own will and hold those who govern accountable to it.”

While these words give me hope and affirm within me what a heart-centered democratic process might look and feel like, I still struggle with the changes going on in our various governmental bodies these days.  Wednesday evening a few of us from UU Miami went to the Miami Dade School Board meeting again. Because being part of a democratic process means you keep showing up as an active participant. As we drove to the meeting Carol Klopfer said that she didn’t remember the school board ever being political before.  Martha Harrison agreed with her.  If anything, the meetings were boring and fairly perfunctory, doing the work that needed to done to run the school district effectively.  During the meeting, I and others continued to speak about the School Board’s upsetting vote against setting aside October as LGBTQ History month. Even though the vote was already a done deal, many of us attended Wednesday night so that our voices could be heard.  Last month’s meeting of the Board when the vote was taken was overrun with boisterous, conspiracy driven, homophobic rants.  When it was my turn to speak, I voiced empathy for the Board, and I shared that I too felt some fear last month.  Then I asked them to vote next year when the same issue would come up not based on shouting voices or fear, but to be guided by what is best for the children and youth, and do their homework in this current school year—monitor the bullying, prejudicial speech, or hate crimes in our schools that may follow in the wake of last month’s vote.  Many people told the Board that they would be holding them accountable for their decision last month.  Many of the speakers educated us about LGBTQ history—we heard about the first openly gay person in our nation to be elected to public office-- Harvey Milk.  The brilliant work of World War II Codebreaker Alan Turing was brought to the attention of the School Board, as well as about Anita Bryant and her fight to oppose the rights of the LGBTQ community in Miami.  At the end of the night, the Board thanked all the speakers for being civil and calm during the meeting.  I left that meeting proud of the many speakers who did not simply walk away from last month’s meeting.  I was proud of us because we did not quit.  Being part of a democratic process means you keep showing up as an active participant.  Last Wednesday night, “We the people” decided that we would use compassion and common sense to hold those who govern accountable and those who govern listened. Will we see the fruits of our labor this school year?  No, but we’ve laid down the seeds of a better crop for next year.  And we will keep coming back to tend them.

About 6 years ago, the church I was serving, DuPage Unitarian Universalist Church rented the building out to a group called “Friends Who March”, a local activist group that formed after the Woman’s March in Chicago.  They wanted to hold an Activist Expo.  Members of the church had a table at this Expo—marketing their internship program for disadvantaged and discriminated against youth.  There were 41 groups that had tables—some of which were Planned Parenthood, Handmaidens, PFLAG, Indivisible, Moms Demand Action, the Environmental Defense Fund, and the Bisexual and Queer Alliance.  The program started at 1 PM and was going very well.  People from all around the area came, wanting to learn about and support the various organizations.  After an hour or so, the leader of Friends Who March came up to me and said there were people there who were disrupting the event and wouldn’t leave.  She told them to go, but they wouldn’t listen to her.

They sat in their car for a little while until some of their supporters joined them, then they were back in front of the building—shouting and waving graphic posters and signs.  The police were called.  The police stayed with us for much of the rest of the afternoon, setting boundaries with the protesters.  I learned from the police that prosecuting these types of protesters is pretty much impossible.  The right of free speech extends to us all.  The rest of the afternoon, the protesters verbally harassed anyone who came to the Expo.  At the end of the event, we asked each of the groups if they felt safe as they were leaving, providing escort for those who did not.

I tell you about my experience because it taught me to remain calm, see how calm I look in this picture-- in divisive and hostile situations—and if that doesn’t describe our present democratic process right now, I don’t know what does.  I have also learned that while I might project calmness, inside I am sometimes scared and angry, sometimes really scared and really angry.  My emotions can and do rise to a level that sometimes threatens to overtake me.  When this happens I feel spasms in my back, and that day at DuPage UU Church, boy was it spasming.  Standing up for my values and our Unitarian Universalist Principles can be challenging and feel dangerous, and right now we are called to stand up for the democratic process in this divided country.  I have come to trust that prophetic wisdom can ground me as I work to make the world a more equitable place for everyone. And I trust that pastoral wisdom will ground me so I don’t end up physically or emotionally incapacitated.

I have a printed copy of this quote by Martin Niemöller (Nee moe ler) in my office. You probably have heard it before:

First they came for the Jews

because I was not a Jew.

Then they came for the Communists

because I was not a Communist.

Then they came for the trade unionists

because I was not a trade unionist.

Then they came for me

and there was no one left

to speak out for me.

Niemöller (Nee moe ler) was a German anti-Nazi theologian and Lutheran pastor.  He became famous for this quote.  It gives me strength to do the work of justice, especially I times like these.  His words of wisdom give me courage to speak truth to power.  Keeping this quote on my desk where I can see it daily helps me manage my anger and fear.  If I don’t speak out, if I don’t use the power and voice that I have, one marginalized group after another, one person after another will be trampled on without repercussions. I will not stand for that.  What are the words or wisdom that give you strength and courage to speak truth to power?  Perhaps you can share them with me after the service.

For pastoral wisdom, I often turn to the Buddha.  For instance, the Tibetan meditation we did today is one I have used to ground myself in the pastoral.  This style of meditation includes holding intentions in my mind and heart while I meditate, positive and healing intentions, held with lovingkindness.  Removing what suffering I can from myself or others, offering the intention of happiness, joy, and comfort for myself and to all those into the world, even those who might be peddling hate, lies, and conspiracy, helps ground me, calm me, fill me with lovingkindness and empathy.

What grounds you these days as you work to affirm and promote “The right of conscience and the use of the democratic process within our congregations and in society at large.”  What inspires you?  What helps you cope with the risks you take as you do work the world needs?  What calms and centers you as you experience the pastoral feelings that will undoubtedly rise up as you do this work?

Thank you all for sharing.  I end with this blessing written by Nancy C. Wood in 1974, which is another that I turn to during these times of trouble.  It reminds me of much of what I have said to you today:

Hold on to what is good

a handful of earth.

Hold on to what you believe

a tree which stands by itself.

Hold on to what you must do

a long way from here.

Hold on to life even when

it is easier letting go.

Hold on to my hand even when

I have gone away from you.

I feel your hands in mine when I am holding onto what I believe, when I embody the work of justice, equity, and when I work to heal the heart of our democracy.  May you feel my hand in yours as you do the same.  Namaste.

Posted by The Human Spirit at 1:25 PM