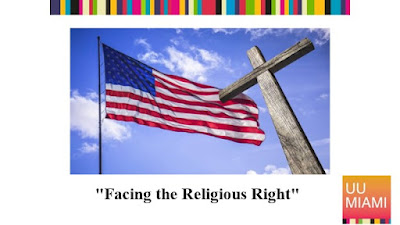 I went to the September meeting of the Miami-Dade County School Board along with two of our members, Martha Harrison and Cam McFrederick.   We were concerned about the school board voting down a resolution to: “Recognize and observe October 2022 as Lesbian, Gay, Bisexual, Transgender, and Queer (LGBTQ) History Month and direct the Superintendent to support policies and practices…that respect and support LGBTQ students and their families throughout the school year.”  In case you didn’t know, this history month did not require anyone in the public schools to participate, did not have any curricula associated with it, and would not have been discussed in the classroom.  The resolution would have simply given the LGBTQ students an opportunity to recognize and honor significant LGBTQ historical moments.  Last year this resolution passed 7 to 1 in favor.  This year the vote was the opposite, only 1 Board member voted in support.

Prior to the meeting, I had received an email from a clergy friend of mine who had asked me to attend so that there would be a liberal clergy presence and voice.  I’m sure you’ve not surprised to know I spoke in support of LGBTQ History month; I pointed out one of Miami’s prominent LGBTQ historical moments.  On November 15, 1937, the La Paloma nightclub which catered to the LGBTQ community was raided by the KKK and they threatened to burn it down.  And thank you to UU Miami member Andie Arthur for bringing this piece of history to my attention.  I spoke about how important LGBTQ history was to me personally.  I told the Board that I have I many LGBTQ members in my congregation and I was concerned about the impact this decision might have on the LGBTQ community.  I pleaded with them to see the consequences of not voting for this resolution—a down vote being perceived as giving tacit permission of an increase in prejudice, bullying, empowerment of hate groups.   But the reality was that my liberal voice and the voices of others who were there to support this resolution were drowned out by the loud, boisterous, organized hate groups who gathered to speak against it; particularly The Proud Boys and Moms for Liberty.

I heard a number of them proclaim that America is a Christian nation.  I heard one woman say that she knew that 95% of the people in the room believed that God created the Earth exactly as described in Genesis, and God created man and woman to be the only physically intimate relationship, and thus the Board had no choice but to vote this resolution down.  I heard many people wrongly asserting that LGBTQ people groom students to become Lesbian, Gay, Bisexual, Transgender or Queer.  I heard one person say LGBTQ people were evil, of the devil, and if they worshipped the devil, then they were a religion, and nothing religious should be allowed in the schools.  They used the DeSantis “Don’t Say Gay Bill” as justification for their positions, even after the Board’s attorney told the Board that the Bill did not relate at all to this resolution.  Despite their obvious support for one another, it didn’t seem to matter what they said, no matter how bizarre or irrational, it was only important that they didn’t support the resolution.  I had never really been so obviously in the minority and felt so alone in a sea of people that not only didn’t share my viewpoint but didn’t think I had a right to express it. I was taken aback, and I felt a little unsafe.  Unsure how to process it all.

Since that experience, I have looked not just for information, but for something to reignite my hope, as I grapple with how I might deal with Christian Nationalists when I am exposed to them in the future.  I say “when” not “if”, because as a voice for liberal religion and as a public representative of this congregation, I know encounters like this are going to be in my future.  I found two different workshops on understanding and facing Christian Nationalists in the past few weeks that refreshed my hope right away.  The workshops were presented by the Westar Institute—the people who brought us the Jesus Seminar—and the Interfaith Alliance—a national organization with a grassroots network of 47 local Alliances in 38 states.  The Interfaith Alliance brought together Congressman Jamie Raskin, Chair of the House Oversight Subcommittee on Civil Rights and Civil Liberties; Simran Jeet Singh the Executive Director of the Religion & Society Program at the Aspen Institute; Connie Ryan the Executive Director of the Interfaith Alliance of Iowa—a personal friend of mine, and I was on the Board of the Interfaith Alliance of Iowa many years ago; Rev. Dr. Richard Cizik, the President of Evangelicals for Democracy; Tayhlor Coleman a Voting Rights Advocate; and Rev. Paul Brandeis Raushenbush the President of Interfaith Alliance to discuss the work being done across the nation to deal with the rise of Christian Nationalism.

Rev. Dr. Richard Cizik is an evangelical minister who is reaching out to evangelicals and reminding them of what they believe from the Gospels, changing the hearts and minds of evangelicals one at a time.  He says the people he talks to are listening and turning away from Christian Nationalism.  Connie Ryan is lobbying at the Iowa State capitol with legislators against the Christian Nationalist agenda, fighting against laws that whitewash history, create Bible classes in public schools, not allow transgender girls to participate in public school sports or collegiate sports, and laws that strip away reproductive rights, while fighting against false narratives and conspiracy theories that demonize teachers and the LGBTQ community.  She has not been successful in all these fights, but she will not stop her work despite some defeats.  And Tayhlor Coleman bought a camper van and is driving across Texas to register voters for the upcoming election.

There is hope out there.  People are working together to turn around this White Supremacist, Christian Nationalist agenda.  Oddly enough, I also felt hope after the defeat of the LGBTQ History month resolution when more than 30 local leaders in the LGBTQ community, myself included, gathered together to process the loss and brainstorm ways of possibly turning the decision around while continuing to find ways to support and empower the LGBTQ children and youth in the Miami/Dade county.  If you are interested in what plans we have and how you might be able to help, join me after lunch in the Emerson Room or online during our Social Justice Committee meeting.

You might ask are Christian Nationalists actually Christian?  Or maybe you’re wondering about the theology and thinking in this Christian Nationalist movement.  Or perhaps you’d like to know what is the opinion most Americans have about Christian Nationalists.  As you heard in the video earlier, Christian Nationalists are politically focused, empowered Evangelicals, less interested in their faith than their agenda.  They have been described as aspirational fascists, political antagonists, willing to turn to aggression and violence to affirm white alpha masculinity.  They are a political machine.  Organized and prepared for the fight.  They are in fact degrading the term Evangelical Christian and many Evangelical churches are worried because they are losing members because of the work and workings of these groups.  These groups are focused on an us vs. them approach to power.  They are no longer grounded in Christian Scripture.  Instead, they’ve embraced the image of a battle-ready Christ fighting to get America back from whomever is perceived as “the other”.  They are “Foxgelicals”, marinating in Fox news to support and strengthen their view of reality, politics, and religion—beating truth into submission.  They want a strong authoritarian leader, like Trump, who may not have a strong Christian faith or may not be able to even articulate any part of a Christian faith, but who can get the Christian Nationalist agenda across the finish line.

But keep in mind, they are not only angry, resentful, and aggressive, they are also afraid.  In fact, they are driven by fear. Fear of pluralism and intersectionality.  They may or may not be afraid of Black Bodies, but they are definitely afraid of Black Consciousness.   Afraid of people who understand the world differently, with their own point of view, a point of view that is not a White Supremacist culture’s point of view.  They believe they must fight black empowerment to save American democracy.  They are afraid of patriotism—a love of our country—for what they want is nationalism—a love of power over others, particularly over those who aren’t white, male, and don’t see the world the way they do.

Know this my friends, we can and will outlive them and outlove them. Contemporary Christian theologian and Professor of Constructive Theology at Drew University's Graduate Division of Religion Catherine Keller in her chapter of the book, Doing Theology in the Age of Trump, A Critical Report on Christian Nationalism, writes that we must fight Christian Nationalists with amorous agonism rather than hostile, aggressive, hate-filled antagonism.  Agonism accepts that there will conflict, but tries to use the energy of the conflict to bend the outcome toward the good.  Amorous is about holding love in our hearts.  Amorous Agonism is a loving, rigorous motivation for justice.  In this spirit, we will continue to act in hope, continue to listen to one another, and continue building intersectional relationships. Relationships that will be shaped and reshaped as we, our country, our world, our knowledge and our wisdom change.  We will continue to strengthen our relationships and bonds with one another, against the idea of white male exceptionalism, against antagonism.  We are capable of loving resistance in this pluralist country.  And so we are called each in our own way to exhibit this loving resistance in our lives.  We are called to help those who want to build back trust in our legislatures and courts, build back trust in the programs that support those who are in need. We are beacons of the possibility of equity and justice for all, and we proclaim that this country has been built on and has been successful because of its diversity and its pluralism, of culture, of color, of beliefs, and worldview. Not because of a Protestant work ethic that has been warped beyond all recognition and not because of white exceptionalism.

[We Unitarian Universalists are called] “to [this] ongoing struggle, [that will be] prone to creative coalitions and unexpected breakthroughs.  Theologically [we find ourselves] sustained, no matter what tragedy, by…Amorous Agonism…[Amorous Agonism] opposes [everything] that unifies merely through opposition…[I challenge you to struggle] respectfully… unyieldingly…[as we] repudiate the politics of pure antagonism…[We build] coalitional confidence…[we may] appear weak before the nationalist power of the right…[who] Often [antagonize]…the weak. But [we are] not paralyzed by this vulnerability. For [this vulnerability] outgrows “cruel optimisms” and misdirected hopes, [and] bind[s] us to actual possibility.  If the political theology of the earth [and all the diverse people on it keeps] appearing, if “we” keep showing up in multiplying alliances and intersectional coalitions, our weakness reveals a [true] bottomless strength.  [This strength] through proximate affection and contagious creativity [is able to] to renew its world-friendships, [and its coalitional confidence] indefinitely… [Our struggle] appears endless, [but as we embrace this struggle with love in our hearts, we are and will always be] undefeated.”