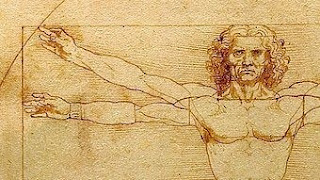 Roots of Humanistic Ideals
Erasmus of Rotterdam’s faith was significantly changed by considering humanistic ideals. A sixteenth century priest, he was exposed to the humanistic ideas of his friend Sir Thomas More, and through theological discussions that seemed trivial, silly, and at times arrogant, Erasmus came to believe that faith needed to be based on personal reflection and reading the Bible, which was an outrageously radical idea at the time.
He felt everyone should read the Bible and derive their own understanding of it, another preposterous notion. He believed that priests, who were viewed as necessary interveners for laypeople to have access to God, were dispensable. Erasmus felt that any person could talk to God in their own way; thus, we all have access to God without need of any assistance.
His faith was based on compassion and love for one’s fellow humans. And his faith was based on rational, even scientific, knowledge—too often he saw the clergy make decisions about how nature functions without even considering personal observation, direct experience, or scientific knowledge of the time. Erasmus did not give up his Christian religion, and has been described as a Christian Humanist.

Atheism, Agnosticism, or Theism
We humans are an interesting bunch, capable of acts of great selflessness and shocking greed, with minds that can achieve brilliant scientific discoveries or be swayed by pernicious demagoguery.  Yet, pretty much no matter where we fall in the spectrum of humanity, people’s belief systems generally fall into three categories: atheism, agnosticism, or theism. What do these terms mean?  Do those meanings change through the spectrum of humanism?  How will a deeper understanding of our beliefs help us “break out of the prisons of separateness” that exist between us and other people?
Some definitions:
Atheist: one who does not believe in the existence of any gods or goddesses.
Agnostic: one who is unsure whether there is a god(s) or goddess(es); the existence of a divine being is unknown, and possibly unknowable.
Theist: one who believes in the existence of a god(s) or goddess(es), divine being.
It may not be easy to firmly place yourself in one of these three categories. You might wonder how you would describe yourself given some additional categories of religious traditions or spirituality: Buddhist, Humanist, Hindu, Christian, Taoist, Jew, Pagan, Polytheist, Pantheist, Panintheist, Muslim, Sikh, Jain, Sufi, Zoroastrian, Odinist, Deist, Unsure, Other. Some of us may describe ourselves using multiple religious descriptors.
While reading this article I invite you to consider breaking down your various belief systems into just one of these categories: atheist, agnostic, or theist. Take a few moments; examine your current belief system and pick a category.

Now, how does Humanism fit into your category? “Humanism is a progressive philosophy of life that...affirms our ability and responsibility to lead ethical lives of personal fulfillment that aspire to the greater good of humanity . . . [Humanists are] guided by reason, inspired by compassion, and informed by experience . . . [Humanists believe that] Life’s fulfillment emerges from individual participation in the service of humane ideals” (American Humanistic Association in their Humanist Manifesto III).  There are some humanists who hold the belief that someone cannot be a Humanist unless they are an Atheist.  There are some people who consider themselves Humanists and Theists.  There are some humanists who are Agnostic.

Fundamentalism--“My beliefs are right and yours are wrong or stupid/ignorant”—are a barrier to being truly Humanistic
When I attended the Beaumont chapter meeting of the Anti-Defamation League, I heard a Rice University professor talk about how we must be willing to be in dialog and relationship with those whose faiths are different from our own. She suggested that if we cannot sit down at the table with Muslim fundamentalists, Christian fundamentalists, Secular fundamentalists, or anyone else whose beliefs are very different from our own, we will not have peace in our world. Fundamentalism--“My beliefs are right and yours are wrong or stupid/ignorant”—can occur in both secular and religious ideology.  And fundamentalism can be a barrier to being truly Humanistic.  We can only build community by inviting everyone to the table, not by saying, “they have beliefs I cannot tolerate, so let’s exclude them.”   Inviting everyone to the table is a fundamental Humanistic belief that we must adhere to whether we are Atheist, Agnostic, or Theist, or our world will continue to struggle to maintain a peaceful and just human community.
Whatever your belief system—atheist, agnostic, or theist—whether you believe in a god, gods, goddess, or don’t, or don’t know, whatever your “numerator” may be, we all share the common “denominator” of trying to understand, at some level, what it means to be human. Atheists might advocate for the separation of church and state, but as caring human beings they also focus their attention on finding new ways to help those experiencing nutritional, medical, and emotional poverty. 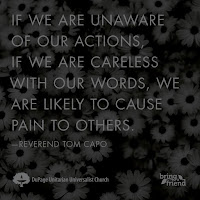 Agnostics may focus on their spiritual journeys, seeking enlightenment, direction, or meaning, but they are also caring human beings that live compassionate lives, integrating into their spiritual path aiding those less fortunate than themselves.
Theists may focus on direction from or connection with the divine, but they are also human beings who reach out to all people, including non-theists, to actively advocate for causes like economic equality and ending the death penalty.
No belief system is without weaknesses; no belief system is without tunnel vision at times. And no belief system in and of itself can possibly meet all of humanity's needs. We need a broader view of humanity and of creation; one that incorporates change, process, and creativity. Raimon Panikkar writes: “No culture, no religion, no tradition can solve the world’s problems in isolation. The key word is pluralism.”  I would suggest the key “term” that might solve the world’s problems is humanistic pluralism.
Blessings, Rev. Tom