What I Kant know by Reverend Tom Capo

I do believe the unexamined life is not worth living.  There is value in examining who you are, what you believe, and how you live, so that you can, to the best of your ability, live in accordance with your personal ethics and morals, so you can find meaning and purpose, so you can make this world a better place for all.

What is Philosophy?
The teachings of Immanuel Kant provoked me to think about our Unitarian Universalist values and to define philosophy.  But first, I believe it is important to acknowledge that Kant is an old white guy, like many of the early philosophers that we have heard about or been taught about.   I will explore the more radical explorations of feminism and existentialism in a future blog.

The dictionary defines philosophy as the study of the nature, causes, or principles of reality, knowledge, or values, based on logical reasoning.  Kant believed that a philosophy that simply studied knowledge and reason in a vacuum was useless—it was just a head game.  He believed that a system of philosophy ought to include practical applications, ought to undergird or amplify the ethics and morals humans are taught as part of their socialization.  In essence, philosophy, to be true philosophy, ought to bring wisdom to our use of knowledge, wisdom to make sense of our experiences, and wisdom to inform our use of reason.

Who was Kant?
Immanuel “Kant is probably [one of] the most important philosophers of the past 2,000 years, yet he lived a remarkably boring life. He was born, lived, and died in the provincial Prussian university town of Königsberg.  He was so regular in his habits that locals set their clocks by his afternoon walk. Kant was the first great modern philosopher to be a university professor and spent his entire student and professional life at the University of Königsberg.”

“His works, … (on the theory of knowledge), aesthetics and ethics had a profound influence on later philosophers, including contemporary ones.”  Kant wrote: “Act only on that maxim through which you can at the same time will that it should become a universal law [of nature]." In other words, the moral worth of an action is not based on the outcome achieved by that action, but by the motive behind that action.  And the motive is moral only if it can be used as a universal principle for the behavior of all reasonable persons.

Kant was critical of the golden rule—you know “do unto others as you would have them do unto you.”—because it is too variable; it depends largely on how you feel about what was done to you. If the motive is variable, then it cannot be a universal principle.  For Kant, the golden rule lacked a truly universal perspective for all reasonable beings.  Let’s keep this maxim in mind as we look further into more contemporary moral issues. 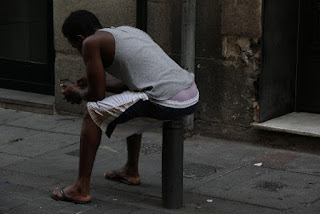 A black person ought not be pulled over just because he is black.  There are no reasons that justify a police person pulling someone over due to their race.  Is this a universal principle?  I think so. What have you been brain-washed to believe by the dominant white culture?  That young black males are violent, abusive, irresponsible, criminals, gang members destined for prison?

Do I find myself eager to force my reasons, my views, my worldview on him as I listen to his words?  Do I want to say to him, “that’s not the way I feel; I am not like that; I didn’t pillage anything; I didn’t kill any of those young black men.” In doing so, would I just be trying to change his mind, or would I be undermining his autonomy?  Do I really want to put aside my objectification?  Am I ready to see the world through his eyes, to understand his reasons for his choices?  Can I grant him the autonomy that I want him to give to me?

Granting Autonomy and Standing on the Side of Love
Our first Unitarian Universalist principle calls us to respect the inherent worth and dignity of everyone, everyone; no exceptions.  Kant clearly states he believes that we all do have inherent worth and dignity.  He calls it autonomy.  He starts out with this assumption.  Do we base our interactions on that assumption?  With everyone?  No exceptions? How do we affirm and promote inherent worth and dignity as well as justice, equity, and compassion?  If you find this a principles you’d like to focus on, I encourage you to look on the Unitarian Universalist Standing on the Side of Love website.  http://www.standingonthesideoflove.org/

January through February 2016, during the Thirty Days of Love campaign, we, Unitarian Universalists are being asked to consider what it means to live our principles, to actively consider the links between love and justice, to consider how contemplation, action, and service fit into our affirmation of our First and Second Principle, and how we might reimagine Valentine’s Day as a day to express our love by opposing oppression and objectification in any form.  It’s a form of Unitarian Universalist spiritual practice that I think has the potential to change your life, and change the lives of the people around you.
We can Find Value in Others, Even When We Vehemently Disagree
There was a young minister in Cedar Rapids who preached to his congregation that the consequence of marital equality was the same or worse than the historic flood that crippled Cedar Rapids eight years ago.  This position statement was printed in the Cedar Rapids Gazette.  And as I was the liberal pastor in town, the paper contacted me for a response.  I said that this statement was inflammatory and hurtful to the Gay/Lesbian/Bisexual/Transgender community.

I went on to say that ministers must realize that what is said from the pulpit has consequences; the minister has been empowered by his/her congregation to speak the truth, and he/she must realize that words spoken from the pulpit will have an impact beyond his/her church.  Then the local ABC station carried an interview with me and an interview with this minister.  After a week of both of us publicly becoming further entrenched in our opposing viewpoints, he, the conservative, me the liberal, an unsettling thought came to me.

Was I using this minister’s inflammatory statements as a means to get publicity for my church?  For the liberating theology of Unitarian Universalism?  This is a sensitive issue for me because I don’t want to treat people as means for my personal ends.  So I reached out to the minister to have a conversation.  I wanted to be careful with this, again not objectify him or try to change his way of thinking to my way of thinking.  But I did want what was becoming a theological cage match to come to a close.  I wanted to reach out to him to treat him as an end, a person, someone who has worth and dignity.
So we got together, and as we talked he shared that he was quite distressed by the negative responses he had gotten from people all over the country for what he had said.  He didn’t understand why all these people being so mean to him.  I listened.  I tried to mentor him as one minister to another, again not trying to change his views, but trying to offer wisdom—to help him to understand the power of the pulpit.  In essence, I was acting in accordance with Kant’s

philosophical view, bringing wisdom to my use of knowledge, wisdom to help make sense of my experience and his experience.
And, as well, I was putting the internal reasoning of our Seven Principles into practical use by honoring his worth and dignity, even though we deeply disagreed with each other.  By treating him with compassion, accepting him just as he was.  By understanding his free and responsible search for truth and meaning still had value, even though it had led to a completely different understanding of the world than mine.  By understanding his right of conscience.  By respecting him even as I disagreed with him.