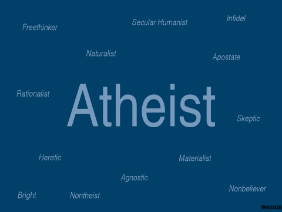 Atheism is a belief that there is no god, gods, or supernatural in any form.   I offer you these words by American astrophysicist, cosmologist, author, and science communicator, Neil deGrasse Tyson, for your reflection:
The moment someone attaches you to a philosophy or a movement, then they assign all the baggage and all of the rest of the philosophy that goes with it to you. And when you want to have a conversation, they will assert they know everything important there is to know about you because of that association.  That’s not the way to have conversation.  I’m sorry, it’s not.  I’d rather we explore each other’s ideas in real time, rather than assign a label to it, and assert you know what is going to happen next.

Myths
I want to explore are the myths about atheists and the potential richness of atheism. 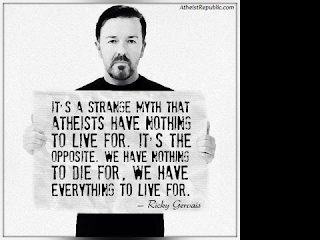 And More Myths
Atheists are: freethinkers, secular humanists, naturalists, infidels, rationalist, apostates, skeptics, heretics, materialists, bright, non-theists, agnostics, nonbelievers.  Some of these qualities many be true of some atheists and not others.

As I listed these generalizations or myths, what did you think and feel?  Do you reject them all?  Do you wonder if some of them have a kernel of truth?
Some atheists hold deGrasse up as one of their own, but he refuses to accept the label of atheist.  If pressed he identifies himself as an agnostic.  He doesn’t want the prejudices that the label atheist incurs; he doesn’t want people to think they know all about him just by that association.  And I would agree with him.
I have met many atheists in my time as a Unitarian Universalist.  None of them were exactly the same.  Big surprise right.  But it is easy to accept a generalization/myth that you have heard about atheists if one person embodies that generalization/myth.
Take the myth that atheists are angry and defensive, particularly when talking about religion.  Well, I have certainly met a few atheists who were are like that.  But I have met many more who were compassionate and accepting of other faiths.

A Focus on What is Important without Belittling Others


Jason Heap, the national coordinator for the United Coalition of Reason has applied to be an atheist chaplain in the armed services.  He talked recently in the Western Suburbs of Chicago about how he felt honored to be invited to the religious rituals and ceremonies of people of faith, and how he understood the meaning and importance of these rituals to these people.

I was able to spend time with him before the presentation and listened closely as he spoke.  Not once did I hear him angry or defensive, not once did I hear him belittle, criticize, or discount any religion or religious tradition, even though he was frustrated by the difficulties he was having becoming an atheist chaplain, and dismayed that some evangelical ministers were lobbying against him.
However, he didn’t belittle the faith of these evangelicals; he simply expressed frustration about how they were impeding him from becoming a chaplain.  I heard him that night talk about his own beliefs with authenticity, focusing on what was important to him about his beliefs.  He talked with passion about the need for an atheist chaplain; a person willing to provide spiritual and emotional support to our armed service members, regardless of whether they were atheist, agnostic, unsure of their beliefs, or people of faith, regardless of their religious tradition.

Drop the Label—Honor Atheism as a Path as Rich as Any Other
All labels, in the end, tend to one-dimensionalize that which is labeled.  “Christian”—boom, put that in a box and on the shelf.  “Muslim”—okay that is in a box and up on the shelf.  “Atheist”---zip! We put that in box and shoved it on the shelf with all the other boxes.  We don’t have to look inside any of the boxes again to know what is inside them, because we’ve labeled them so we know at a glance. 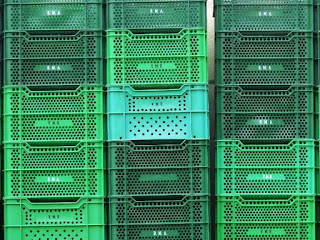 How often do we do that?  How often has each of us done that today?  Atheists choose a way of looking at people, life, and the world that can be rich and full of meaning.  A path just as rich as any other belief system or religion or spirituality.  Each of us has choices in how we live in the world, how we interact with others, how deeply we choose to go into an experience.
We can choose a prickly path that reacts against those different from ourselves or a peaceful path that enriches our lives when we meet someone different from ourselves.  We all have choices.  I invite us to put aside our pre-conceived notions of others and to resist the urge to settle for the surface-only understanding that labelling offers.
Listen to each person we encounter—listen to them as they talk about what they believe, what they value, what enriches their life, what has transformed them, what passions call to their hearts.  Take that labeled box off the shelf, open it up, and explore the treasures inside.  We have so much to learn if we choose this way of being with one another. 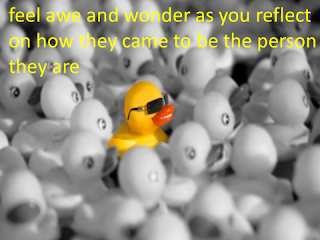 Atheism affirms rationalism, non-theism, science, and skepticism.  But it is not limited to these; as with any other belief, atheism can invite a person into awe and wonder, meaning and truth, purpose and passion.  Like the Native American women who molded a pot to hold their water and their mythology, let us keep in mind that each time we create a pot, a label, the water it holds is not static.  The pot is static, a moment in time, a set experience; the water keeps flowing, changing, it never stops.  Life hurries past us and runs away, too strong to stop, too sweet to lose.  May we embrace life and each other, understanding that none of us is static, we are all flowing, changing, strong and too sweet to lose.
Let us covenant to really get to know each other, and for that matter, really get to know anyone we come into contact with, in real time, without the preconceived baggage we often attribute to them, without believing that we know all we need to know about them.  Let us covenant to see each person we meet in all their uniqueness; feeling awe and wonder as we reflect on how each person came to be the person they are.
Blessings,
Rev. Tom

Posted by The Human Spirit at 1:00 PM