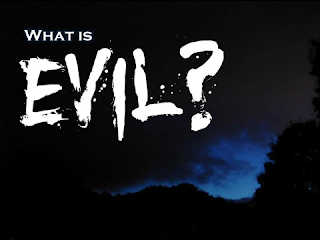 I offer these words by Russian novelist, historian, and outspoken critic of the Soviet Union and communism, Aleksandr Solzhenitsyn, for reflection:  “If only it were all so simple! If only there were evil people somewhere insidiously committing evil deeds, and it were necessary only to separate them from the rest of us and destroy them. But the line dividing good and evil cuts through the heart of every human being. And who is willing to destroy a piece of his[her/their] own heart?”

Here are some Unitarian Universalist Views of Evil.
Reverend Paul Rasor:
"Unitarian Universalists and other religious liberals have always emphasized the positive aspects of the divine and human nature. As a result, critics sometimes charge that liberals don’t truly understand the reality of evil…For religious liberals, evil is not a supernatural force locked in a cosmic struggle against the forces of good. Liberals also do not worry much about the traditional “theodicy” problem—how evil can exist if God is both all-loving and all-powerful. For liberals, evil is neither a demonic spirit nor a philosophical dilemma, but a reality to respond to and confront."
Reverend Victoria Stafford:
"Sometimes I use a very subjective, almost subconscious barometer when reading the news of the day and deciding whether some action bears the weight of the word evil. It’s not the magnitude of an event, nor the cold-heartedness of those involved, nor even the historical impact. It’s the degree of heartbreak that I feel: beyond sorrow or horror, a sense that something has been blasted apart, a shattering of hope, the collapse of what I thought or wished were true about the world and human nature. There are some truths, some news, that break the heart—not permanently, but utterly, for a while, as the realization forms perhaps for the thousandth time: this, too, is part of our humanity. Evil is the capacity, within us and among us, to break sacred bonds with our own souls, with one another, and with the holy. Further, it is the willingness to excuse or justify this damage, to deny it, or to call it virtue. The soil in which it flourishes is a rich compost of ignorance, arrogance, fear, and delusion—mostly self-delusion—all mingled with the sparkling dust of our original, human being."
Reverend Judith Meyer:
"What is evil? An aspect of human nature. Apply enough pressure to any of us and something ugly will surface. Evil isn’t some malevolent power floating around in the universe, waiting to penetrate some unsuspecting soul. We do it all by ourselves. To acknowledge evil is to see something we don’t want to see. We all cultivate an idealized view of ourselves. Self-knowledge takes hard work. Overcoming evil begins with being honest. Reckoning with evil is more than an internal struggle. Evil surfaces in the cycles of violence we perpetrate as a society, often out of a misguided sense of necessity. It is a studied ignorance that keeps us not only from examining ourselves but also from looking critically at the institutions we create. The power to overcome evil has as much to do with overcoming our numbness and helplessness about what is wrong in our world as it does with mastering our impulses. Whether humanity will ever be free of the cycle of violence, we cannot say… But the change begins only when we are willing to learn the truth, and dedicate that fearful knowledge to the struggle."
Reverend Abhi Janamanchi:
"I see evil as the willful separation from, and lack of concern for, the “common good.”  Evil occurs when the capacity for empathy exists and is ignored; when better alternatives for being in right relationship are ignored; when we fail to act on the imperative to correct the discrepancy between what is and what ought to be; and when we resist our powerful impulses to be, and do, good. …  We are products of our evolutionary heritage and our cultural history. We might transform evil if we recognize our own complicity in the processes which engender and sustain it. We will overcome evil when we refuse to play the game or to be silent, when we make a determined effort to understand evil as a possibility that awaits transformation. Then we might inhabit a safer, more peaceful, and more just world."