"What are You Listening For?" preached by Reverend Tom Capo on November 17, 2019 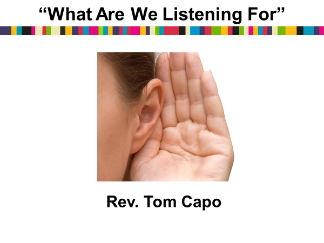 Hold these words close and let them plant seeds in your hearts.  So may it be.

Sermon
A number of years ago, I was attending a workshop in Chicago at Meadville Lombard, a Unitarian Universalist Seminary.  Each day, I would walk from the hotel to the divinity school.  As I walked those several blocks I passed by many homeless people, destitute, begging for money on the street.  Every day I would pass them by, not making eye contact for fear of them harassing me for money.  On the last night of the workshop a group of us ministers went out to eat together.  We walked from the school to a nearby fast food Indian restaurant.  As we entered the restaurant, an elderly black man tried to engage us in conversation, asking if we could give him some money for some coffee.  His speech was garbled and some of the words he used seemed disjoined, almost random.  Most of us walked by, trying to ignore him, but one of my colleagues, Reverend Dennis Hamilton, put his arm around the shoulder of this man and asked him to join us for some food.  Dennis offered to buy him dinner and encouraged him to tell his story.  The rest of us were amazed at this.  But we said nothing.  Dennis spent much of the meal listening to this man’s story, disjointed as it was.  At the end of the meal the man thanked Dennis and walked away seeming a little happier, less anxious than he had been before talking and eating with Dennis.  I asked Dennis why he had done this.  He said that he felt called to reach out to this man; he could tell this man needed companionship and affirmation of his worth and dignity.  Dennis said he often reached out to homeless people, not always giving them money or buying them a meal, but he tried to at least treat them as a human being, saying “Hi” to them, actually looking at them, making eye contact with them, wishing them well, and at times, talking with them—listening to their story and offering them a bit of companionship.  He said it often didn’t take much time; and time and a listening ear were both something he could offer.
Dennis has made a habit of intentionally listening to people without are often ignored or rejected by society.  What he hears gives his life meaning and purpose.  What he hears impacts his mind and heart.  These are words, sounds that he opens himself to by choice.  And these sounds, these words, he hears shape his behavior into interaction into one of active interaction with “the other”.  We each listen for certain things as we move through life.  Not unlike the woman who drops the change on the busy street, if we hear what we are attuned to, no matter the chaos around us, we will turn our attention toward it, opening our minds and hearts to what we hear.
What sounds are part of your intentional listening habit? Here are some less profound examples of intentional listening.  I listen to Rock and Roll when I want to get moving or to reminisce. I know when I am meditating, I like classical music or the sound of the ocean or the forest. I have heard that some of you like Opera, concerts, choral music, and make time for those in your life. Some vibrations are vital to us, to our mental, emotional, spiritual nourishment.  These sounds fill us with joy, peace, offer us resilience, help us to remember times of love and connection and beauty, so we can face a world that is noisy and conflicted.
How do we listen to the sound of someone begging for money on the street?  Or the sound of an incoherent stranger?  Or the sound of someone who is crying, yelling, using profanity?  How do we listen to a singing bird, a purring cat, a barking dog?  How do we listen to the wind in the trees, the waves on the ocean?  With each of these examples, chances are you had some sort of emotional response—tension, laughter, frustration, joy, peace.  How we listen varies from one stimulus to another, and from one person to another.  Each of us is unique.
We’re surrounded by multiple sources of noise pretty much non-stop, even in our sleep.  For our own sanity’s sake, our brains filter out a lot of that continuous barrage, and it becomes background noise, white noise.  Yet even while our brains are busy categorizing what we should file away in the background, we can still consciously select those sounds we decide ae important enough, for whatever reason, to attend to. 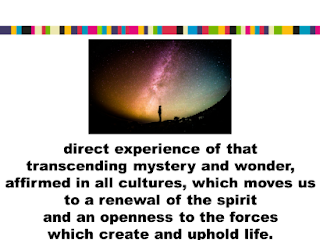 The First Source of our Unitarian Universalist Living Tradition is direct experience of that transcending mystery and wonder, affirmed in all cultures, which moves us to a renewal of the spirit and an openness to the forces which create and uphold life.  All six Sources are foundational to our spiritual nourishment and exploration, but this First Source is particularly important.  It is not based on ancient religions or a particular belief or philosophy; it is based on your personal experience.  Early in our Unitarian history, the Transcendentalists—Ralph Waldo Emerson, Henry David Thoreau, Margaret Fuller, Theodore Parker—encouraged Unitarians to turn to direct experience of that transcending mystery and wonder, and to engage fully in the experiences of life and of nature to guide their spiritual search for truth, meaning, purpose. In other words, to listen intentionally. Here’s part of a meditation by Margaret Fuller:
The clouds are marshalling across the sky,
Leaving their deepest tints upon yon range
Of soul-alluring hills. The breeze comes softly,
Laden with tribute that a hundred orchards
Now in their fullest blossom send, in thanks
For this refreshing shower. The birds pour forth
In heightened melody the notes of praise
I sigh, half-charmed, half-pained. My sense is living,
And, taking in this freshened beauty, tells
Its pleasure to the mind. The mind replies,
And strives to wake the heart in turn, repeating
Poetic sentiments from many a record…
I loved to see the lightnings flash athwart
The stooping heavens; I loved to hear the thunder
Call to the seas and mountains; for I thought
‘Tis thus man’s flashing fancy doth enkidle
The firmament of mind; ‘tis thus his eloquence
Calls unto the soul’s depths and heights…
Ah now how different!
The proud delight of that keen sympathy
Is gone; no longer riding on the wave,
But whelmed beneath it: my own plans and works,
Or, as the Scriptures phrase it, my ‘inventions’
No longer interpose ‘twixt me and Heaven.
Today, for the first time, I felt the Deity,
And uttered prayer on hearing thunder.
She’s fully engaged with life and nature.  “Today, for the first time, I felt the Deity, and uttered prayer on hearing thunder.”  She struggles to find the words to express the ineffable direct experience of life and nature.  How often do you make time in your busy lives to fully engage deeply with what you see, hear, smell, taste, touch.  I believe next week the religious exploration program will be giving the children of this congregation the opportunity to eat mindfully.  To engage all the senses, not just taste.  And also engage mind, heart, and soul in eating.  I remember the first time I did this, I realized that ice cream doesn’t have a smell.  This may not seem like much, but it was the beginning of my realization that I wasn’t attending to the many things I put in my body.
When I was growing up, I had two brothers.  When food was put on the table, the quicker you grabbed it the more you got.  Eating fast meant you got more to eat.  Eating fast meant you didn’t taste or smell much of what you ate.  Eating fast meant that food was eventually associated with filling up more than just hunger, it filled any emotional void inside me, so I never had to look at what was causing that void.  This is a quick way to being overweight and disengaged from what is outside and inside you.
Intentional listening with an open mind, heart, spirit is challenging in today’s hyper-kenetic, hyper-sonic world, so of course that makes intentional listening even more important now because with so many messages coming in through our senses impacting how we think, feel, believe, and act, we need that awareness, and we need to self-aware choices about what we take in.  Things that nourish us.  Things that lift us up.
So how do we strengthen our intentional listening muscles? 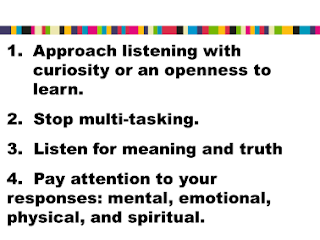 Here are some ideas:

1.         Approach listening with curiosity or an openness to learn.
When you hear a bird, resist simply filing away the sound as “bird”.  Instead, open yourself to wonder.  How does that bird make that sound?  What kind of bird is it? How far did that sound carry? Did the sound remind you of something? Of someone?
2.         This might be hard.  Stop multi-tasking, just for a few minutes, and focus closely on the what you are listening to.
Put down the cell phone like, far enough away where you’d really have to reach for it, stop working, stop talking, and listen with your whole being.  Attend to what you are hearing.
3.         Listen for meaning and truth in what you hear.  I’m not just talking about words that you hear—although do that too—what’s the truth you might hear in the sounds of the wind through the palm fronds?  What’s the meaning you might hear in the sound of the water breaking along the beach?  Does what you hear shine or shimmer?  Does it give something to you?  Does it invite you to action?
4.         Pay attention to your responses, mental, emotional, physical, and spiritual as you listen.
Does your heart beat faster or slower as you listen?  Does your mind quiet down or race? Do you feel angry, sad, afraid, joyful as you listen?
I invite you to read this Mary Olive poem four more times.  The first two times read with curiosity and an openness to learn.  The second two times read while attending to your mental, physical and emotional responses.
It doesn’t have to be
The blue iris, it could be
Weeds in a vacant lot, or a few
Small stones; just
Pay attention, then patch
A few words together and don’t try
To make them elaborate, this isn’t
A contest but the doorway
Into thanks, and a silence in which
Another voice may speak.
My friends, may we listen more often to what the world offers us:
May we listen so that we can hear;
Hear so that we can feel;
Feel so that we can know;
And know so that we can change ourselves and the world.
Posted by The Human Spirit at 2:12 PM