Making the Most of Mistakes by Reverend Tom Capo 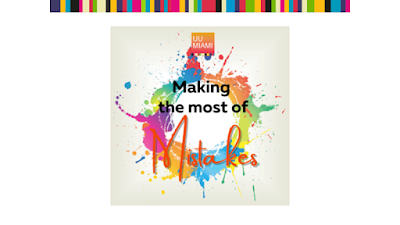 When I started out as a minister, I frequently made mistakes during services, losing my place in a script, getting up at the wrong time, skipping parts of the service, mispronouncing words/names.  This was due, at least in part, to feeling some anxiety in the pulpit.  This was something new to me and I had not developed my ministerial presence and my preaching voice, so I didn't feel grounded and at ease in the pulpit.  Anytime someone starts something new, it is likely that they will have some level of anxiety or discomfort—whether physical, mental, emotional.  Unfortunately for me, and perhaps for some of my very early congregations, my still developing skills of leading a service and preaching were being learned right in front of a group of people.

At some point in my early ministerial journey, I decided to embrace my mistakes.  I felt if I intentionally made a mistake early in the service that this would take the pressure off, I wouldn't have to feel anxious waiting for a mistake to happen.  And guess what? It helped.  My nervousness was reduced and I was able to more easily settle into my ministerial presence and expand my voice in the pulpit.  I still make mistakes, this is after all live, but I don't dwell on them, at least during the service.  I have come to realize that I am who I am; I have always had some difficulty pronouncing some words and names—so I practice them, listen to them on YouTube--I do the best I can.  But here’s the thing: what I am called to do as your minister is to be my authentic self, flaws and all, when I preach. There is no such thing as a perfect minister.

Making mistakes is rarely easy on a person.  As you heard Christine tell us earlier, you might feel like you want to die or throw up or crawl under the covers so no one will see you.  I know that every single person listening to this sermon, heck every single person on this planet, has made a mistake of one kind or another.  My philosophy about mistakes is that we will all make them and we can try to avoid some of them, but, it's the meaning we make from the experience of making a mistake that is the important thing.

What are the various ways that you have responded when you have made a mistake?  Well, it kind of depends on what kind of mistake, doesn't it?  You could have said or done something that hurt someone's feelings; you could have made a mistake on a test, a paper, a report, a presentation; you could have tried to do something new, maybe juggling, and made multiple mistakes as you were learning a new skill.  I tried to teach myself to juggle.  I was able to get three balls passed 4 times and that was after a couple of months of practice.  My young adult nephew picked up the juggling balls a few years ago and learned it in a matter of days.  Was it a mistake for me to have even tried?  I clearly don't have the talent for it.  Maybe.  But what did I learn from it?  And how did that learning change my behavior?

What about a really big mistake, one that is very visible, one that hurts people, say when a mob storms the Capitol building, vandalizes it, and occupies it.  Commits an insurrection or stages a coup.  Actions that frighten people in the Capitol and really all over the country?  Actions that halted, for a little while, the process of certifying the Presidential election results?  What about some of the police who treated those insurrectionists differently because of the color of their skin—not taking the precautions that needed to be taken, opening barricades for them, taking selfies with them?

Whipped up into a frenzy or not, caught up in the heat of the moment or not, actions – mistakes – have consequences.  Arrest.  Job loss.  A police record.  Public shaming.  What have your thoughts been about what might constitute appropriate consequences? Natural consequences?  Meaningful consequences?  When I think about those people, I have to admit I want them to be arrested. I want them to lose their jobs.  I want to them to be watched by law enforcement from for the rest of their lives.  I even want them to be publicly shamed.  And as for the police who treated those white people differently than the people of color who marched this summer, I want them to resign or be fired, or at the very least admit their mistakes publicly and enroll in about 10,000 hours of racial bias training.

When I have such strong feelings about a situation, my response is to step back and wonder where these powerful feelings are coming from.  I don't want my strong feelings to lead to me to make the mistake of advocating for retribution rather than for meaningful consequences.  And so I wondered, what am I called to learn from this situation?  Am I to figure out how to forgive them?  I am not sure I am entirely ready for that just yet, even though I know that holding onto fear, anger or resentment toward them will only hurt me, not them.  How can I make meaning of this mistake, even if it wasn't my mistake?  I realize that many of the people who were part of this insurrection will receive consequences for their behavior and that is just, I hope.  And while they will receive consequences, rather than feeling a vicious vindication, I will still consider how my Unitarian Universalist Principles call me to respond.  I will consider how to treat them with respect, dignity, compassion even as they receive consequences.  No one said that Unitarian Universalism was an easy faith, but how can I get up here and preach on our Unitarian Universalist Principles of compassion, human worth and dignity, and the interdependent web of all existence, if I don't at least try to live these Principles even when it would be so much easier to just give into my thirst for revenge?  Some of us might think it is too soon to think about some of our Unitarian Universalist Principles after what these people did. I mean let's work for justice, equity, and democracy, we can work on those other—those harder-- Principles later. The insurrectionists need to be dealt with and discredited and even shamed first.  But isn't that the same argument that some conservatives have made after school shootings?  It is too soon to deal with the complicated issues.  And then what happens?  The issues are avoided.  I am going to work for this democratic nation, so that it can be stable and just and equitable.  I am going to look at the larger cultural system that allowed this insurrection to happen and perhaps even supported it.  And I will also wonder where is the opportunity for affirming compassion, human worth and dignity, and interdependence as I try to learn and grow from the storming of the Capitol.

I was talking to indigenous people across the country this week—one of them was from the International Indigenous Speakers Bureau, which I didn't know existed until this week-- finding speakers for the Indigenous People's History of the United States study we are beginning this afternoon and continuing on the second Wednesdays of the month. They each talked about a different way of being in relationship that has worked in their culture for centuries.  And I also talked with some of them after the insurrection in Washington.  Consistently, they spoke of how to treat a stranger.  Bringing the stranger into your home, clothing and feeding them, so that when the stranger returns to their own home he/she/they will speak favorably of those he/she/they visited.  This is not new, I mean Jesus said something like this: "For I was hungry and you gave me food, I was thirsty and you gave me drink, I was a stranger and you welcomed me."  But here's thing, this philosophy informs how Indigenous Americans conduct business interactions as well.  When I started talking with each person about what they would charge to do a presentation, each of them asked me to consider the importance of how to treat the stranger -- affirming comfort, respect, worth and dignity.  They each asked me to keep these things in mind as we came to agreements on assigning a monetary value to their time, talent, and knowledge.

And then each told me that with any presentation they do, they believe it is the beginning of a relationship, not just paying them to come and speak—which is a transactional or capitalist way of doing things--but embracing this new relationship as something that would be ongoing, with a willingness to open our minds and hearts to one another.  And with a willingness to be changed through our continued interactions with one another.  This took me by surprise.  I thought I was just calling to set up a presentation.  How white of me.

After my interactions with Indigenous People this week, I wondered how what I learned might impact my future interactions when I come across a person who believes to the core of their being that the Presidential election was stolen or that they must still rally in the streets for Trump in order to save this democracy.  Will I be able to treat them as the stranger?  Will I be willing to begin a relationship with them with an open heart or open mind?  Will I be able to be a presence in their lives in the hope that positive change can come for both of us?  Am I willing to take risks with them?

To laugh with these people and risk appearing the fool.

To weep with these people and risk appearing sentimental.

To reach out them and to risk exposing my true self.

To love them and risk not being loved in return.

To hope that I can make a difference in their lives and risk despair.

To try and risk failure.

And if I fail, to keep living my Unitarian Universalist Principles, and go back out, and try again.