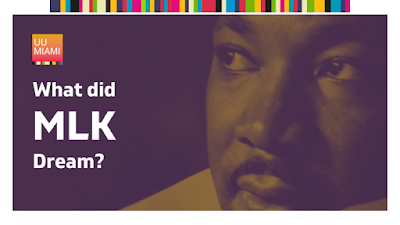 What did Martin Luther King, Jr. dream?  Over the years I've read many of his speeches and a couple of his biographies.  His sermons and speeches were passionate and inspiring.  And it is clear that he was a person who lived his beliefs.  His beliefs grounded him in his work in the world, not just advocating for civil rights.  Professor of Ethics and Theology at Union Theological Seminary, Gary Dorrien, wrote: "Dr. King, in his last years, was more radical than everyone around him. He dragged the Southern Christian Leadership Conference (SCLC) to campaign in Chicago, where his lieutenants did not want to go. He got pelted with rocks in Chicago and admonished his staff that white Americans had never intended to integrate their schools and neighborhoods. He added pointedly that white Americans “literally sought to annihilate the Indian.” He defied the Civil Rights establishment, the Johnson Administration, and his closest advisors by opposing the Vietnam War. He campaigned for a minimum guaranteed income and bitterly regretted that he could not speak in public about democratic socialism. At the end he dragged SCLC into the Poor People’s Campaign…"  In addition all this, Dr. King built interfaith connections around the country, advocated for a balance between reason and faith in religion, and preached his vision of what churches should be.  He preached: "The church is not a social club, although some people think it is. They get caught up in their exclusivism, and they feel that it’s a kind of social club with a thin veneer of religiosity, but the church is not a social club. The church is not an entertainment center, although some people think it is. You can tell in many churches how they act in church, which demonstrates that they think it’s an entertainment center. The church is not an entertainment center…in the final analysis the church has a purpose. The church is dealing with man's ultimate concern." ("Guidelines for a Constructive Church,'' Sermon Delivered at Ebenezer Baptist Church in Atlanta, GA, June 5, 1966)  Much of my life as  Unitarian Universalist, I have affirmed this vision of what "church" should be—dealing with peoples' ultimate concerns— and preached with that vision in my heart.  We gather together to explore truth, meaning, and purpose, as well as reflecting on how to live out truth, meaning, and purpose in our lives.

Although the language he used was very Christian, many of Dr. King's sermons don't require much in the way of translation for me with my faith and outlook.  His sermons provide a grounding and a reminder of the importance of thinking deeply about one's faith and working diligently for justice, equity, and peace in our world.  He preached: "And I say to you, I have also decided to stick with love, for I know that love is ultimately the only answer

to mankind's problems. And I'm going to talk about it everywhere I go. I know it isn't popular to talk about it in some circles today. And I'm not talking about emotional bosh when I talk about love; I'm talking about a strong, demanding love. For I have seen too much hate. I've seen too much hate on the faces of sheriffs in the South. I've seen hate on the faces of too many Klansmen and too many White

Dr. King's life and his work serve as an example/a model of putting the needs of other people before one's own needs to make change happen.  His life was often at risk and was ultimately lost because he chose to speak truth to power, and to keep speaking truth to power.  We know there are risks when working for justice, equity, and peace.  UU Miami put up a Black Live Matter banner in front of our building and here within our sanctuary.  This is a risk.  And in case you didn't know you, the banner outside was stolen on election day.  We quietly replaced it.  We knew there would be—not might be--risks from putting that banner outside and for that matter inside our building.  And this flag supporting lesbian, gay, bisexual, transgender, transsexual, queer, questioning, intersex, asexual, ally, and pansexual communities also makes a loud and proud statement, as does our LGBTQ flag outside our building.  There are risks when we speak for equity and justice, and when we speak truth to power and when we act on our deeply held beliefs and here at UU Miami we're willing to take them.  Our work in the world at UU Miami is part of our living tradition.  It's built into our Principles with words like justice, equity, democracy, dignity, and peace, words we choose to say.  And working for justice and equity and peace is also a choice we choose to make.

We, each of us and as a community, make choices as to what risks we are willing to take and what issues we are willing to address to make this world a better place.  Whether we share our truths about justice and equity with our family, our friends, our co-workers, strangers.  Whether we show up for a rally or protest.  Whether we speak truth to those in power in our local, state, or national government.  Whether we side with love and those who are marginalized or oppressed.  We each have choices we make and causes we will support.  We need to nurture one another in this work and not try to pigeon-hole what we are "supposed" to do and how we are supposed to work because we are Unitarian Universalists.  Dr. King wouldn't be pigeon holed either in what work he chose to take on.  He preached: "For those who ask the question, “Aren’t you a civil rights leader?” and thereby mean to exclude me from the movement for peace, I have this further answer. In 1957, when a group of us formed the Southern Christian Leadership Conference, we chose as our motto: “To save the soul of America.” We were convinced that we could not limit our vision to certain rights for black people, but instead affirmed the conviction that America would never be free or saved from itself until the descendants of its slaves were loosed completely from the shackles they still wear. …Now it should be incandescently clear that no one who has any concern for the integrity and life of America today can ignore the present war. If America’s soul becomes totally poisoned, part of the autopsy must read “Vietnam.” It can never be saved so long as it destroys the deepest hopes of men the world over. So it is that those of us who are yet determined that “America will be” are led down the path of protest and dissent, working for the health of our land." (Beyond Vietnam, April 4, 1967, New York, NYhttps://kinginstitute.stanford.edu/king-papers/documents/beyond-vietnam)

I read and listen to Dr. King's words from time to time, for inspiration, motivation, direction.  I let his dreams call to my dreams.  When I listen to his "I have a dream speech", I wonder what are my dreams?  And I ask you, what are your dreams for a better world?  What are you willing to do to achieve those dreams?  I affirm what Dr. King preached, “Injustice anywhere is a threat to justice everywhere. We are caught in an inescapable network of mutuality, tied in a single garment of destiny. Whatever affects one directly, affects all indirectly.” (In Building a World House, a chapter in Where Do We Go From Here: Chaos or Community? a book by Dr. King) And I realize that I only have enough time, talent, and treasure to do a certain amount.  So I watch for where my time, talent, and treasure will make a difference.   Sometimes I can have a pretty big impact and make a difference in what is happening in the world right now.  Sometimes I am just talking to a marginalized or oppressed person or persons and realize how I can support them with their work.  And sometimes the project I take on requires a focus and intention for a long period of time in order to make a difference, and perhaps is a project that won't get completed in my lifetime.

I bring this up because right now this congregation is working on decentering whiteness, acknowledging White supremacy and White privilege, reading about White supremacy and White fragility.  We just started studying Indigenous Peoples' History in the United States and the issues Indigenous Peoples are facing.  And I wonder what new thing, what righteous action, what new way of doing social justice might result from these intensive study groups? What will we birth into the world because of them?

At our last Social Justice Committee meeting, we decided on a couple things.  One is that this congregation is small enough to be nimble in its social justice work.  To be open and ready for when an injustice arises and bring ourselves to that work – as we did when we worked on closing down the Homestead detention center for immigrant youth.  And we decided to work for and financially support four local nonprofits: People Acting for Community Together or PACT—a local interfaith grassroots organizing group working on issues such as policing, gun violence, and housing-- the Florida Immigrant Coalition or FLIC—working for immigrants rights-- Planned Parenthood—working for reproductive rights, health, and choices--and Florida Rising— Defending voters' rights and building political power to combat systemic racism that attempts to leave Black and Brown communities overlooked and underserved.  Do you have a role in any of this? What might that be?  That is for you to decide.  Maybe you could join us for the Decentering Whiteness Book Study or the Indigenous Peoples History classes.  Maybe you could learn more about the nonprofits we are supporting, or get involved with the nonprofits we are supporting.

Dr. King preached: "Let us be dissatisfied until slums are cast into the junk heaps of history, and every family will live in a decent, sanitary home.

Let us be dissatisfied until the dark yesterdays of segregated schools will be transformed into bright tomorrows of quality integrated education. Let us be dissatisfied until integration is not seen as a problem but as an opportunity to participate in the beauty of diversity.  Let us be dissatisfied until men and women, however black they may be, will be judged on the basis of the content of their character, not on the basis of the color of their skin. Let us be dissatisfied." ("Where Do We Go From Here?," Address Delivered at the Eleventh Annual SCLC Convention. Martin Luther King, Jr., August 16, 1967 https://kinginstitut) On this Martin Luther King, Jr. holiday weekend, you might read or listen to a speech by King. Consider what injustice you feel dissatisfied with in our world and let King's passion and vision, his dreams for a better, more peaceful world inspire you.  And decide your next steps.  Learn more about the issues that are important to you.  Reflect more in order to deepen your understanding of why these issues are important to you.  Or act more, allowing what calls to you to be manifested in how you live your life.  In this complicated and challenging world, we need to remember that though  "I am only one, … still I am one. I cannot do everything, but still I can do something; and because I cannot do everything, I will not refuse to do something that I can do.” (American author Edward Everett Hayes)