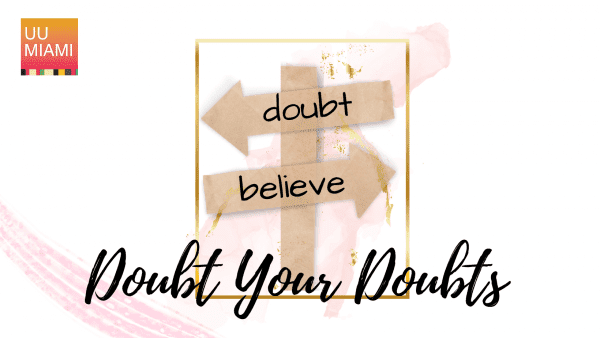 The first reading is from the Christian Gospel of John 20: 24–25; this scene occurs after Jesus’s death, when he has appeared to the apostles.

24 But Thomas …one of the twelve [apostles], was not with them when Jesus came. 25 So the other disciples told him, “We have seen the Lord.” But he said to them, “Unless I see the mark of the nails in his hands, and put my finger in the mark of the nails and my hand in his side, I will not believe.”

The Second Reading is from the Leaping Loon blog by Unitarian Universalist minister Rev. Leslie Mills.

"Today, in common vernacular a Doubting Thomas is someone who will refuse to believe something without direct, physical, personal evidence; in other words, a skeptic.

Thomas has been given the blame and the burden for doubting what he did not see for himself.  He is criticized for not having “faith.”  And yet the other apostles were given the same proof that Thomas demanded—only after they were allowed to see did they rejoice that their teacher had returned to them.

Faith—blind faith—if it is not first passed through the shadow of doubt and the fire of thought, is weak and untempered.  For faith to have meaning, it must be grounded in reality.  We know this.  And Thomas knew this, too.

I wonder if Thomas, apostle though he was, was actually a Unitarian Universalist.  Like many of us, he questioned and asked for proof, rather than offering blind trust.  He searched for truth and meaning in the only way he knew how—demanding to touch with his hands and see with his eyes."

I left the Catholic Church in my late teens with a lot of doubts and skepticism about organized religion.  I also left Catholicism with doubt that there was any kind of god or divinity.  Since then I have learned to value my doubts on this spiritual journey I am on.  Perhaps some of you at one time or another in your lives have experienced doubt or skepticism about religion in general or a specific religion or certain religious teachings, truths, beliefs, life-meanings or even your own personal truths, beliefs or meanings.  Have your doubts been something you wish you could have avoided or have they been something you’ve welcomed as

a useful tool on your spiritual journey. As I continue on my spiritual journey, particularly as we all emerge into a mostly post-pandemic world, I have started wondering more about doubt, certainty, faith, and how all these fit for me now.

Like many Unitarian Universalists, I have explored a number of religious traditions and considered how they fit for me.  I have been a theist and an agnostic, but never wholly an atheist.  I guess atheism feels too absolute for me, sort of like I’ve put everything in a box and stored it on a shelf, offering me less opportunity and wondering during my spiritual exploration. But that’s just me, and I remain open to different perspectives on atheism that might help me explore it.  We have a number of atheists in the congregation and in Unitarian Universalism, and I can imagine that your/their understanding of atheism may be very different than mine; you/they might see atheism as spiritually, emotionally, ethically rich, full of awe and wonder.  And that is wonderful.  Unitarian Universalism offers us a community where we can coexist peacefully in these differences.  We’re able to share our perspectives with each other without judgment, and we learn/grow through our sharing.  We gather here as Unitarian Universalists, at least in part, to affirm that revelation is not sealed, and that what we understand as truth is fluid, ours is an active faith, always in process, always having the potential for change, as we experience life and as we share with our experiences, truths, beliefs, and meanings with one another.

I am frequently drawn to a song by Peter Mayer; he wrote a Unitarian Universalist hymn that many love to sing “Blue Boat Home”.  The song I am drawn to is called, “God is a River” Let me share a few lines:

In the ever-shifting water of the river of this life

I was swimming, seeking comfort; I was wrestling waves to find

A boulder I could cling to, a stone to hold me fast

And so I found an anchor, a blessed resting place

A trusty rock I called my savior, for there I would be safe

From the river and its dangers, and I proclaimed my rock divine

And I prayed to it protect me and the rock replied

God is a river, not just a stone

God is a wild, raging rapids

And a slow, meandering flow

God is a deep and narrow passage

And a peaceful, sandy shoal

God is the river, swimmer

I am drawn to this song because, at least for me, it affirms letting go of absolute unchangeable truths, beliefs, or meanings.  It affirms letting what the universe, god, goddess, whatever it is beyond my narrow life, flow around and with me, perhaps influencing me or aiding me in coping with a complex world.  I also realize that some meanings, truths or beliefs may be transient, only useful at certain points in my life or in certain circumstances.   Some of you might have trouble with Mayer’s use of the word god, but here’s the thing: the words we use to attempt to describe truths, beliefs, and meanings are imperfect, words like spirit, soul, god, reverence, holy, sacred to name a few.  I have a tendency, like most of us do, to try to find something to hold onto—a truth, belief, meaning—that helps me cope.  A metaphorical rock in a river, but in reality, spirituality is like a river, we are all in process, as is everything around us.  And while I can feel the importance, the value, the usefulness of certain truths, beliefs and meanings as I flow along the sometimes wildly raging and sometimes slowly meandering river.  All of us are hampered by imperfect language as we share and listen to others. Even so imperfect as our language can be, there is something in the sharing that helps me find what I need to ground me in life, for a time or through an experience.

What do you think doubting Thomas, the Jesus skeptic, the possible Unitarian Universalist, would think about the idea that beliefs, faith, and meanings ebb and flow, changing as we move through life, as we have mundane, profound, transformative experiences, as we explore wisdom from various religions, philosophies, and TED Talks?  Perhaps he would say that until he has proof that what he is hearing or reading is true, he will not believe it.  Perhaps he would say that if he can’t see, smell, taste, or touch something, it has no truth for him.  Perhaps he would say if a truth is “not first passed through the shadow of doubt and the fire of thought, [it] is weak and untempered.”  In other words, “for faith to have meaning, it must be grounded in reality.”

So, what’s your criteria for determining whether a belief, a truth, a certain meaning of a life experience works for you, will help ground you, will be useful to you?  Deep reflection?  Do you share it with others and listen to their thoughts?  Do you try it on—find out how it works in your life?  If that belief changes, do you hold it gently for a little while to see if it still resonates with you?  Do you accept it only if it is grounded in reality, science, makes rational sense, that is has “passed through the shadow of doubt and the fire of thought”?  If it isn’t rational, logical, reality based, thoroughly explored, do you consider the belief or truth weak or untempered?

This story is meant to illustrate the challenge of accepting a new truth or belief or meaning.  How much do we need to know, how fully do we need to understand, before we accept a truth into our lives? If you’ve been metaphorically struck by a shaft of new insight, pierced by a sudden recognition of a new truth, if that new truth is resonating deep within you, how do you respond?  I not recommending Blind Faith, accepting a truth, a belief, a meaning without any reflection. Reflection is important; it’s how we make meaning, but if I spend all my time in reflection, is that really helpful? To me? To the world?   At some point I need to decide if the truth, belief, meaning is worth acting upon, is worth bringing into the world to change it—and possibly myself—for the better.

As we consider a truth, belief or meaning, we are tempted by two extremes. On the one hand, there is faith without doubt, a kind of faith so impatient with Thomas, for instance, that it would cast him out for asking impossible questions. On the other hand, there is only the world of sensation and science, thus creating doubt in the rather difficult acceptance of living a life with any faith. Thomas presents a different way. Thomas lives a critical faith. Thomas knows what it is to lose, to suffer, to find his hopes devastated — but he also knows what he really wants. He doesn't deny his doubts or his faith.  And I, too, want both doubts and faith in my life.

I think that doubt is useful, but not the end all of spiritual exploration.   We will never have all the information we need to know if a truth or belief or meaning is exactly what we need, when we need it, or how we need it.  I do believe some reflection and doubt is useful, but I also believe there is a limit to how far to explore a truth or belief or meaning if I think it might be useful to me.

And I have come to find that doubt has other, perhaps less pronounced, purposes on a spiritual journey.  (Adapted from: 3 Kinds of Self-Doubt That Are Actually Signs of Success: These kinds of self-doubt signal you're actually on the right path in life. By Jessica Stillman, Contributor, Inc.com)  Here are three of them.

1.         Being willing to doubt your truths, beliefs, meanings and hear alternative viewpoints and fresh ideas is a sign of a healthy spirituality. This sort of humility helps you to connect openly and honestly with others, and become more tolerant of difference. Not being sure what you believe at times can be uncomfortable but it is also a sign of a mature heart and mind.

2.         If you worry a little about your truth, belief or meaning, that's actually a good indication you understand it well enough to see its full complexity but haven't yet settled into complacency. And your self-doubt is likely to spur you toward greater exploration.

3.         Don't be led astray by thinking that just because you have found a truth, belief or meaning that seems to work for you now that that is synonymous with a lack of doubt, just affirm that life will provide future opportunities for questioning and questing, and that you're probably doing pretty well.

We all have doubt and faith in varying degrees.  How we choose to work with them is up to each of us.  As I have opened up to both faith and doubt, at different points in my life, I have found that the path forward generally becomes clearer if I am ready and trusting that it will, and have people like you in my life.  As interfaith chaplain and college instructor in World Religions Fred Lamotte writes:

When times are dark

Trust in your breath.

Rest in your heart.

Bow to the stranger.

This is the gospel of astonishment.

If we are completely lost