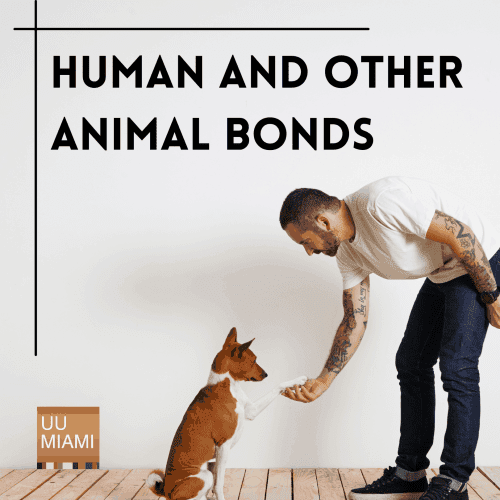 In the summer of 2017 in New Orleans, Louisiana during our yearly Unitarian Universalist denominational meeting, General Assembly (GA), I was sitting in the big hall during the final plenary session of GA, and the moderators were walking us through the business we would be working on.  We were going to vote on two bylaw changes related to the Unitarian Universalist Principles and Sources.  There was a proposed change to the Sources, which talks about those wellsprings from which we draw in our spiritual search and for spiritual sustenance.  The Second Source reads: The living tradition which we share draws from many sources including words and deeds of prophetic women and men which challenge us to confront powers and structures of evil with justice, compassion and the transforming power of love.  The reasoning for the proposed change was to address and include people whose genders are non-binary.  So, we were asked to vote whether or not to change the bylaw to say "words and deeds of prophetic people," rather than "women and men". While a few people got up to promote this bylaw change, I don't recall anyone getting up to contest it.  When it was brought up for a vote, the change was enthusiastically affirmed.

And then the other bylaw change came up.  It was related to our First Principle: we covenant to affirm and promote the inherent worth and dignity of every person.  The Unitarian Universalist Animal Ministry was advocating that we change this Principle from "every person" to "every being".  As I recall, multiple factors significantly impacted how the proposed change was received by the delegates and moderator.  The plenary session was running out of time due to extended discussions on the issues around the hiring practices of the Unitarian Universalist Association, and discussions about how the Association would change the structures and practices that had resulted in very few people of color being hired for positions at the UUA and in the Districts.  And the other thing I noticed was that there was no real discussion of changing the First Principle.  And so when the delegates voted at this last session on the last day of GA, we voted to end the business of the Association, without really giving this new wording a chance to even come to a vote.

The Unitarian Universalist Animal Ministry continues to advocate for this bylaw change, even though it has not come up again at a General Assembly since then.

"Every Being".  The vision of the UU Animal Ministry is:  By understanding the inherent worth and dignity of every being, Unitarian Universalists [will] live deeply in joy and compassion, nourishing themselves as they nurture, care for, and protect the many others in a multispecies world.

Unitarian Universalists generally are on the cutting edge of progressive issues, but for some reason, bringing other animals in addition to human ones into the Unitarian Universalist Principles seems to be challenging, even though many Unitarian Universalist have non-human animal companions in their lives.   I didn't say "pets" in their lives.  And at the end of the service, we are not having a "pet blessing."  I know you have been bombarded by word sensitivities in our culture.  We're all learning to be more inclusive in how we refer to each other and more aware of the hurtful baggage some of our old descriptors might carry. What about the word "pet"?  What baggage or connotations does it carry?  How does that word affect how you think about and treat your non-human animal companions?  How would it feel to be called someone's pet?

"Pet" has the connotation of tamed, trained, or of kept, pampered, spoiled. In the Urban dictionary: "A pet is usually described as someone who is submissive, willing to take orders, and appreciate a sense of ownership. Whilst this is mostly true, what people don’t realize is that pets are very self-aware, and they can use their status in a positive way, often retaining a significant amount of power in the relationship." According to PETA (People for the Ethical Treatment of Animals) the use of the word "pet" is patronizing to animals, and may [open a gateway] to animal abuse. They are telling us that this offensive word should be struck from our language and replaced with the term "companion animal."

I want to show you a couple pictures of my animal companions.

This is LUUNA, with two UU because we always considered her a Unitarian Universalist.  She came to us.  She somehow found our house and our neighbor started feeding her on our back porch.  When we found out what our elderly neighbor was doing and asked her about it, she said, "I thought she was your cat."  I had brought all our previous cats into our home, but this one, staring longingly through the glass sliding doors of the back porch touched Martha's heart, and so she joined our family.  Family isn't always blood or even of our own species. Family is the beings in your life who want you in theirs. LUUNA was with us for around 10 years.  She was a funky little animal, wanting affection, giving affection, but on her timetable and only as much a she wanted.  She would snap with a little nip when she was done with affection.  She put up with our eccentricities as we put up with hers.  She left us, as in is crossed the rainbow bridge during our first year here in Miami. 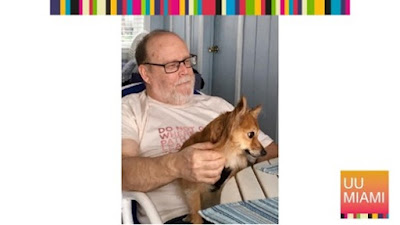 After our children established their own lives, we adopted Emerson.  He had been sent to a kill shelter, but was saved by the Animal Rescue Foundation.  We visited him at a foster home.  Both Martha and I had to be present at the visit before the adoption could take place.  There was a lot to consider in this adoption.  We had an application to complete that asked us about our commitment to this bringing this animal companion into our lives. And there were agreements that we had to adhere to if we were going to adopt, including training, medical care, and possible follow-ups by the Animal Rescue Foundation to be sure our new Animal Companion was being properly cared for.

Emerson came to us as a traumatized young animal.  And we had to decide that we were willing to help him deal with his trauma if we were going to bring him into our family.  Writer Nishan Panwar said, "Real family does not come from your blood. It is the people standing beside you when no one else is."  We decided to stand beside Emerson, get him a behavior therapist to help him and us with his trauma—we had to learn how to help him.   And as it turned out, Martha and I too went through some trauma shortly after Emerson came into our lives, and his companionship, his energy, and his always wanting to play because therapy for us, as he stood beside us during our difficult times.

One more thing about Emerson, I learned a lot more about non-verbal communication.  Perhaps I was not ready early in my life to be as attentive to non-human animal communication as I have been with Emerson.  His therapist taught us a lot.  How raising one of his front paws meant hesitation, uncertainty.  How his barking was often about fear rather than anger.  How his turning away from strangers, even while strapped securely in his carrier against Martha's or my body, meant he was afraid of them, not ready to trust them.  The language of his ears could fill a small notebook.  Emerson takes a while to get to know people, and can't be pushed to be in relationship with someone new, even when they think he is cute and want to touch him.  I am more aware of both human and non-human body language now.

How about your non-human animal companions?  How well do you know them?  How do they fit in your family?  Do you feel that there is give and take in the relationship?  Do you feel that certain types of non-human animal companions fit better in your life at certain times?  Would you support changing our First Principle to affirm and promote the inherent worth and dignity of every being?

Let us treat each human and non-human with reverence, respect, dignity, worth.  As one of our Unitarian forebears, missionary, doctor, peace-activist, Albert Schweitzer—this is a picture of him--, once said, "In everything you recognize yourself again.   Wherever you see life—that is you! What is this recognition, this knowledge apprehended by the most learned and the most childlike alike?  It is reverence for life, reverence for the impenetrable mystery that meets us in our universe, an existence different from ourselves in external appearance, yet inwardly of the same character with us, terribly similar, awesomely related.  Reverence before the infinity of life means the removal of the strangeness, the restoration of shared experiences and of compassion and sympathy."